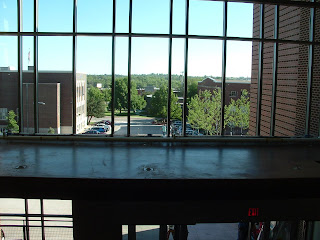 Second-story ledge in the new building, clear for the last time
It's been an incredible couple of weeks in the move to the new building. Last week we stopped moving and started polishing, preening and primping things up for the all-class alumni reunion held every 5 years. You can read more about this event here. Over 500 alumni converged on the new building to see what we had accomplished in the past year. Some of them knew that the building was in the works, but many who did not were drawn up the hill by the sight of... 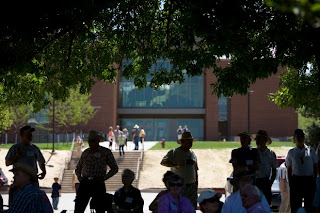 ...this. Look carefully at the building windows and you will see creatures on the ledge. Photo by the Rapid City Journal.
Meet the Blaschke brontothere family, donated to us by the Field Museum last year and carefully kept in storage until now. They will be formally unveiled in a new diorama setting next month, on a ledge over our front door. These are life-sized plaster sculptures, incredibly lifelike, made for the Field in 1931. 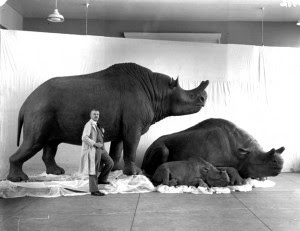 Frederick Blaschke poses with the family.
Titanotheres, or brontotheres, were rhinoceros-like mammals (NOT dinosaurs) found in many places, including what is now the White River Badlands area of the Northern Plains. Their fossils have been found in some abundance in South Dakota. In fact, the first fossil collected from the Badlands area is the lower jaw of a titanothere, found by Hiram Prout in 1839 and now housed in the Department of Paleobiology, National Museum of Natural History, Smithsonian Institution. 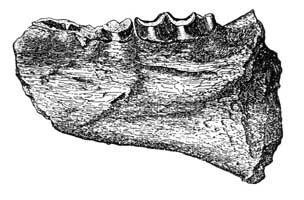 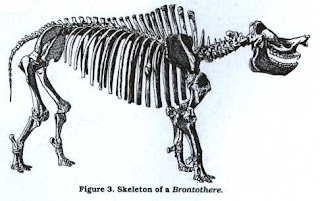 Needless to say, what we find are (sometimes) beautifully preserved bones, not whole animals. Part of the science of paleontology is determining, insofar as possible, what creatures our fossils belonged to and what they may have looked like in life. We look at the closest possible modern analogues (in this case, rhinoceroses) and draw what conclusions we can. It is always an incomplete science, with a great deal of inferential reasoning and detective work thrown in. It's like CSI: Cenozoic.

So Blaschke started with what is known.... 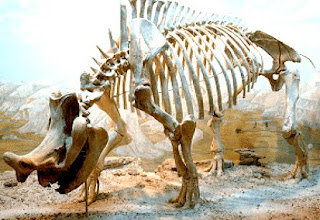 Brontops robustus, our museum mascot
...and filled in the gaps, magnificently. His works stood behind glass at the Field for the next 70+ years. Darren Naish has great posts about brontotheres here and here.

Times change. The Blaschke brontothere diorama at the Field Museum fell victim to changing tastes and demands. The plan called for them to be removed. Through a chain of wonderful contacts, we were put in touch with the Field and assured them that we would put these marvels on exhibit here, close to the fossils and original stomping grounds of the beasts on which they were modelled. Their sheer size made it impossible to put any of them other than the baby on display in the museum, so they were kept in storage until a suitable place was readied.

A couple of weeks ago, the big move occurred. Knuckles and hair whitened, hearts palpitated and nerves shot off in all directions like Philadelphia fireworks. The move required a flatbed truck, a small forklift, and piano dollies, which I have been ordered to stop calling oversized roller skates. We closed the building and perimeter because there were so many things that could go wrong in spite of great planning and care. A few of us were allowed to be there with cameras. It turned out to be a wonderful show. No brontotheres were harmed in this move, though a few paleontologists needed restoratives when all was done.

Q: How do you get a 9+' tall sculpture into your shiny new building? A: Take off every door that you possibly can, even though you just put them on. 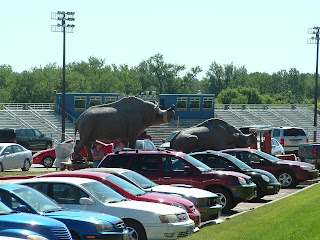 Dad and Mom Brontothere, aka Fred and Ginger or Levi and Beth, on the flatbed at the end of the parking lot. You can see the guys under them for scale. 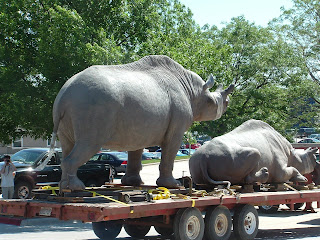 Backing up to the new building. 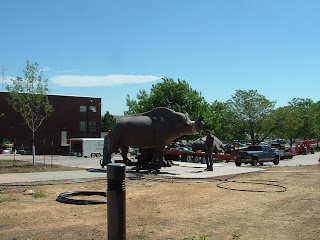 Dad is on the forklift.

Dad approaches the building. I would not want something this size to be facing me this closely in real life, let alone moving toward me, even at this pace.

A closeup to show the incredible detail of the plaster. The strips are protecting his eyes. Blaschke omitted no detail, not even the tiniest--these are rhinoceros taxidermy glass eyes. 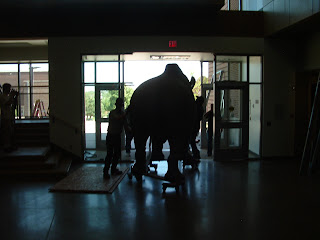 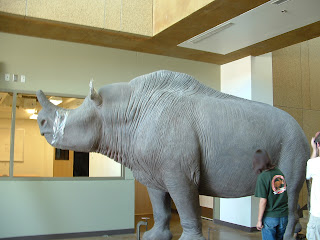 Dad is pivoted in place for the final forklift ride. 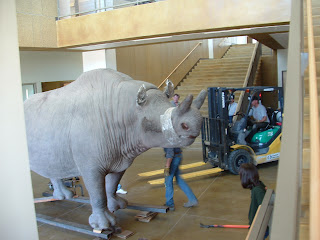 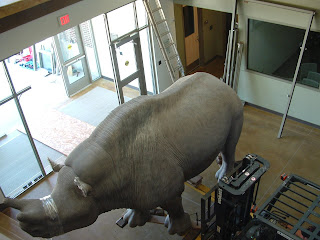 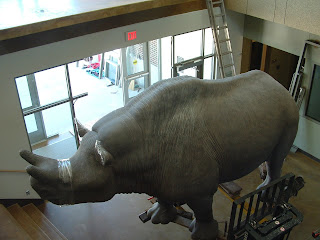 Dad keeps rising. For all of our worries, this turned out to be a problem- and drama-free production. 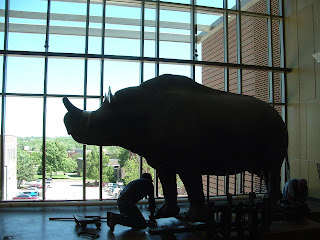 Dad reaches the ledge and is roller-skated into his final position.This may have been the most unnerving moment of all.
To be continued.....
Posted by Unknown at 5:16:00 PM

Fantastic - thanks for sharing. We need copies of these pics for the library, this needs to be part of the campus history!