Family recipe Monday: casseroles: one to have, one to share

"Casserole: A dish or pot made from a material such as glass, cast iron, aluminum, or earthenware in which food is baked and, often, served. The word, which may also refer to the food itself...is from the French and was first printed in English in 1708....Cooking in such dishes has always been a part of most nation's gastronomy, but the idea of casserole cooking as a one-dish meal became popular in America in the twentieth century, especially in the 1950s when new forms of lightweight metal and glassware appeared on the market. The virtues of easy-to-prepare meals were increasingly promoted in the women's magazines of the era, thereby supposedly freeing the housewife from the lengthy drudgery of the kitchen....By the 1970s casserole cookery took on a less-than sophisticated image..."
---The Encyclopedia of American Food & Drink, John F. Mariani [Lebhar-Friedman:New York] 1999 (p.59)

We have many casserole recipes in the Simple Gifts files, most of which we remember from childhood but have not ourselves prepared as adults. And I have to wonder if we are missing out on something that way. The technique is ancient and cross-cultural, the approach is simple, and the results can be wonderful. Certainly up here, in prime hotdish and potluck territory, the concept has never waned. I have a quilting pattern for a hotdish warmer and carrier in one, which is a necessary item up here.

A casserole is a dish for a group, whether family or friends. We seem to be hard-wired to share food with those we care about, as a way of fostering good feelings and showing love and care.

Here are a few good ones from the files. 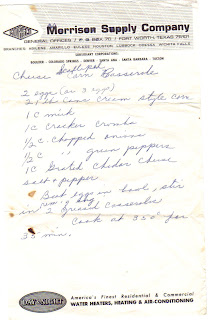 This is notable on a couple of points: there is no canned soup used as a filler/binder (that did not start in earnest until the 1950s, and this one is older), and it makes two casseroles (one for home and one to freeze for a future potluck, church supper, or food to take to a friend's house in response to illness or death). Casseroles keep well and improve in flavor the second day. You could have this on hand for a busy night when everyone would be tired and hungry, and it would be wonderful.

Here is one, daring for its time and place (a cup of sherry?! in a casserole?! in West Texas?!), from a friend of my grandmother's. 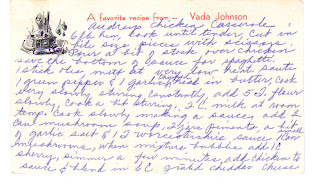 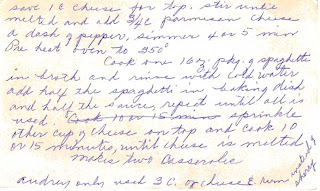 Audrey’s chicken casserole
1 6-lb. hen, cook until tender {in water to cover}. Cut in bite size pieces with scissors. Pour a bit of stock over chicken. Save the bottom of sauce for spaghetti. 1 stick oleo, melt over very low heat. Sauté 1 green pepper and one chopped garlic head* in butter. Cook very slowly, stirring constantly. Add 5 T flour slowly, cook a bit, stirring. Add 2 cups milk at room temperature. Cook slowly, making a sauce. Add 2 cans mushroom soup, 2 jars pimentos, a bit of garlic salt, 2 T Worcestershire sauce and 1 small can mushrooms. When mixture bubbles, add 1 cup sherry. Simmer a few minutes. Add chicken to sauce and blend in 6 cups grated cheddar cheese. Save 1 cup cheese for top. Stir until melted and add ¾ cup Parmesan cheese and a dash of pepper. Simmer 4 or 5 minutes. Preheat oven to 350 F. Cook one 16-oz pkg. of spaghetti in broth and rinse with cold water. Add half the spaghetti in baking dish and half the sauce. Repeat until all is used. Sprinkle other cup of cheese on top and cook 10 or 15 minutes until cheese is melted. Makes two casseroles.

Note on original card: “Audrey only used 3 C. of cheese and rum instead of sherry.”
--Audrey Smith

*I think that this should be "clove." It could be a little overwhelming on the garlic front otherwise, though that cup of sherry (or rum) might smooth things out. AFTER you put the scissors down.

Note that, once again, it makes two casseroles. One to have, one to share.

Finally, here is a one-dish version of squash casserole. A great thing to have in late summer, when the zucchini and yellow squash start swarming....you can double this and have one for you, one for the neighbor who foisted off gave you the squash in the first place.

Pyrex was a dream come true for cooks of my grandmother's generation. You can find more about its history here.

Happy Monday. Remember to keep one and share one, whatever it is.
Posted by Unknown at 6:00:00 AM

Looking at the proportions, that chicken casserole might indeed take a whole head of garlic! But who's to know, now that Audrey has drunk all the sherry...

And I have just thoroughly outed myself as a non-native up here by calling it a casserole instead of a hotdish....