Women's History Month challenge for March 16 — If you could have lunch with any female family member (living or dead) or any famous female who would it be and why? Where would you go? What would you eat?
March 19 — Have you discovered a surprising fact about one of your female ancestors? What was it and how did you learn it? How did you feel when you found out?
March 20 — Is there a female ancestor who is your brick wall? Why? List possible sources for finding more information.
March 21 — Describe a tender moment one of your female ancestors shared with you or another family member.
(I'll get to March 17 and 18 later. These all fit together nicely.) 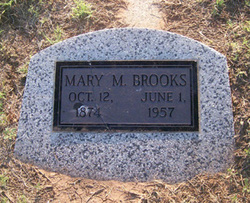 Victory Cemetery, Altus, Oklahoma
We're obviously, er, a bit behind on the Women's History Month Challenge and Family Recipe Monday posts, this being March 21, but this gives me a chance to catch up a bit. It's been an intense couple of weeks, both at work and on the international scene, and sometimes the gears don't shift into writing mode easily at the end of the day. Not when they've been in git-er-done and set-your-phaser-to-stun modes all day.

But spring is here. That does not necessarily mean that the blizzards are over and gone up here, but it does mean that the sun is moving back up the sky. On Friday, we leave for the annual Craniac trip to Nebraska. Much MUCH needed, I can assure you. Keep watching this space--or the skies, if you are lucky enought to live along the sandhill crane flyways.

In the meantime, howzabout that lunch with one of the older girls? That's easy. I'd like to go to my great-grandmother Mossie's boarding house in Altus, Oklahoma, and help her cook and serve, then do the clean-up for her while she told me what her recipes were and whence she got them. I don't have that information, since she wrote very little down, and I'd like to know what went into her decision to move back to Oklahoma after her husband's death and open this enterprise. I've hit that brick wall on the details. I want to know the whole story now, and we just don't have that.

Mossie's surprising story is that she homesteaded on her own in Oklahoma as a young single woman, giving up her claim only to marry the cute homesteader next door, Newt Brooks. She could do everything a man could do during the day, from building houses to raising crops, and after hours could do everything a woman was expected to do on top of that. She was a gifted seamstress, needleworker and cook, all with no electricity. I am awed and wonder just what it is I do during the day in comparison to her work day.

So no restaurant for us, thanks. We'll eat in at Widow Brooks's boarding house. I think I'll probably ask for chicken and dumplings, and watch exactly how she makes it. If Mossie was anything like her daughter Vada, she will most likely have a spectacular dessert hidden and ready to serve (but only after saying that she didn't have much in the house, but that we were welcome to share in what little there was. Yeah, right. That boarding house table would have been groaning under the weight of all that "little" food.).

If I could request dessert, I'd want to try her Gold Cake to see how that was made. Here is all that is written down about it. I think I can figure it out, but I'd like to know how she made it.

We might not get a choice, you understand. We might have to settle for the peach cobbler she had made. I think I could manage that.

Then, for the clean-up, I'd be able to see what her homemade soap was like. This is one of the few things that she did write down. The writing is too faint to scan well.


Soap
Cold soap: 1 can of lye, ½ gallon clear grease, ½ gallon water. Put lye and water into vessel and let cool. (The lye makes it hot) and dissolve. Then add the melted grease just barely warm and stir until thick.

Cooked soap: 1 gallon water, 1 can lye, 5 lb. grease cracklins (an 8 lb. lard bucket is about 5 lb.). Put ½ gallon water and cracklins and lye in pot and cook until cracklins are eaten up then remove from fire and add the other half gal. of water and stir until thick.
--Mary Marcella Walker Brooks

The girls on that side of the family all tend to be strong (that's the diplomatic word), but Mossie's granddaughter Shirley will always be my rock. And they all show tenderness through feeding people. Except for Shirley, who's sweetness itself, they may have been a bit gruff or snappish at times, but the Johnson-Brooks-Walker-Honnoll women never let anyone go hungry. Ever. That's where the tenderness shows.