Thirst is not the answer, oceans come and go,
I loved her seven seas worth, Lord I loved her so.
But she let me down so easy, one slow drop at a time.

I would've killed myself but it made no sense,
Commiting suicide in self defence.
But I lost everything I brought her
When she said babe, you're just a wave, you're not the water

Centuries ago we were living on the gold coast
She was still in love with a long, gone, cold ghost
I was only trying to turn back the tide of her tears

I felt like an endless ocean, rolling through the fog
Full emotion drifting like a weather beaten log
I even thought that I out-thought her
Till she said babe, you're just a wave, you're not the water

I said someday we'll love again, then you'll know the score
I've taught you everything I know and maybe even more
That's true she said, more than you ever will

I said I've been your raging river, precious African queen
I've shown you everything that I've ever seen
But she knew more than I had taught her
When she said babe, you're just a wave, you're not the water

Well I followed her far and wide with all of my will
Water on the move, you know it never stands still
And I moved every muscle, just to prove it can be done

Then up some old sad river, where snow white lilies float
I came to her for mercy, but I hardly rocked the boat
She seemed surprised that I had caught her
But she said babe, you're just a wave, you're not the water

It seems to be Loren Eiseley day around here. The onset of autumn will do that to you. It's a peculiar blend of acute melancholia, happy reflection, somber remembrance, and delight in the season's sudden slanting golden light. Around here, we don't exactly kick through piles of fallen leaves (we might if they weren't so scarce): we seek out the changing landscapes, physical and temporal. So did Loren. He captured the autumnal feel of the South Dakota and Nebraska badlands better than anyone else.

“Man would not be man if his dreams did not exceed his grasp. ... Like John Donne, man lies in a close prison, yet it is dear to him. Like Donne's, his thoughts at times overleap the sun and pace beyond the body. If I term humanity a slime mold organism it is because our present environment suggest it. If I remember the sunflower forest it is because from its hidden reaches man arose. The green world is his sacred center. In moments of sanity he must still seek refuge there. ... If I dream by contrast of the eventual drift of the star voyagers through the dilated time of the universe, it is because I have seen thistledown off to new worlds and am at heart a voyager who, in this modern time, still yearns for the lost country of his birth.”

“Nothing grows among its pinnacles; there is no shade except under great toadstools of sandstone whose bases have been eaten to the shape of wine glasses by the wind. Everything is flaking, cracking, disintegrating, wearing away in the long, inperceptible weather of time. The ash of ancient volcanic outbursts still sterilizes its soil, and its colors in that waste are the colors that flame in the lonely sunsets on dead planets.” 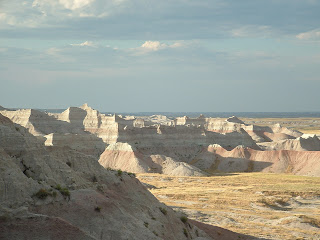 “Since the first human eye saw a leaf in Devonian sandstone and a puzzled finger reached to touch it, sadness has lain over the heart of man. By this tenuous thread of living protoplasm, stretching backward into time, we are linked forever to lost beaches whose sands have long since hardened into stone. The stars that caught our blind amphibian stare have shifted far or vanished in their courses, but still that naked, glistening thread winds onward. No one knows the secret of its beginning or its end. Its forms are phantoms. The thread alone is real; the thread is life.”
Posted by Unknown at 6:00:00 AM No comments:

Still here, not yet extinct 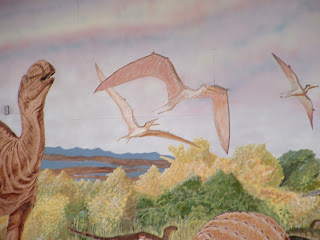 I know it looks as if we declared a hiatus and ran away, but we're all still here. 2011 has not been treating anyone kindly, and the list of illnesses, injuries, losses and disasters shows no signs of stopping. It occurs to me that I need to repost the guidelines for family and friends to follow as part of their lifetime appointment as loved ones, including: Don't get sick. Don't get injured. Don't let any natural disasters happen anywhere near you. Don't let any personal disasters happen anywhere near you. And please get to work on that immortality thing--there is no one I can spare. Got it?