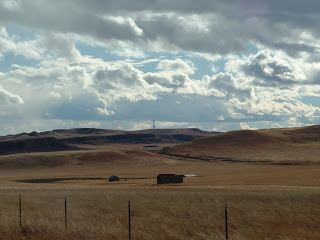 Cabin in high wind, South Dakota. Brr.
When it comes to seasonal change, we are not amateurs up here. Last week brought us two days of 60+ mph winds and steep drops in temperature. (We are now minus one long-dead cottonwood tree in the back yard. The giant branch that fell fortunately did no damage.) At least we had a few weeks of fall colors in the subtle prairie hues and the not-so-subtle blazing-yellow cottonwoods. Last year the leaves froze and fell off in brown lumps before they could change color. Not exactly festive.
It's time to start thinking about the holidays, from Dia de los Todos Santos today and Dia de los Muertos tomorrow through to the New Year. It's astonishing how many traditions at this time of year revolve around festive food. The harvest is in, the fire is lit, and we seek out friends, family and lights in a million different forms. Something deep urges us to celebrate most when the days are shortest, hoping for the sun to return.
Dressings and stuffings to go with or in roasted poultry (respectively) are too good to save for the holiday season only, yet that's the one time many of us serve them. Everyone seems to have a regional or family favorite recipe which is written on stone and sets the standard by which all others are measured. You can, and many do, argue all day about white bread, oysters, apples, walnuts, and chestnuts in your preparation. You can argue about whether it should be used as a stuffing and cooked inside the bird, or a dressing cooked on the side. No matter what you claim, someone will argue with you that their version--which is very likely their grandmother's version--is the only correct one in the history of the universe.
In West Texas, we don't do oysters, chestnuts or fruit in our dressings (not stuffings), largely because these were difficult or impossible for the older girls to get hold of a century ago. The version I grew up with was based on cornbread and sage. The first time I tried making it in college, I knew how to do it even though I had never tried to do so before. It was physical memory from helping my mother and grandmother. and it was as startling as an out-of-body experience. When many years later, I made this for Gene's mom and sister, they were speechless with shock, being from Delaware and firmly in the white bread and oyster camp. Cornbread was not on the Thanksgiving menu at all for them. There were, however, no leftovers.
The very best description of this was written out by my college friend and genealogy ace Bill Page and published in the Monkeygiving Cookbook. This one brings back the aroma of my grandmother's kitchen. It's very close to the one she used--this is another recipe you were just supposed to know, and didn't get written down much. Bill is from West Texas, too. This was the first write-up of cornbread dressing I ever saw that accurately described it as a form of bread pudding. I would add crumbled sage to this in generous proportions. I can skip the oysters and chestnuts, but not the sage.
Real Southern Cornbread Dressing
Making cornbread dressing is an art, not an exact science.

This recipe makes enough dressing for a crowd of 30 or more.

Experiment with the recipe to match what your family likes.

Remember, cornbread dressing is a special type of bread pudding ... you need plenty of liquid to start with.

Oil the roasting pan. I use PAM, but you can use butter or Wesson oil.

Most recipes call for equal amounts of white bread and corn bread.

I use a little more cornbread, and a little less white bread, rather than a 50-50 mix, roughly 2/3 corn bread and 1/3 white bread.

Buy the cheap kind of canned biscuits--those without butter or other flavoring.

You can also substitute crushed unsalted saltine crackers for some of the white bread.

Rip the bread into pieces about the size of the end of your thumb--it's therapeutic.

I usually cook about 40 biscuits and 48 dinner rolls. This makes enough for me to eat a few while I am cooking.

Cook this bread several days early, rip it up, freeze it, and then pull it out to thaw the night before the day you will cook the dressing.

I make four 8.5 x 11 pans of yellow cornbread (each pan requires 3 packages of instant cornbread--so, you need to buy 12 packages total of cornbread mix). The corn bread should be crumbled into lumps.

You can make the cornbread from scratch, but it will not improve the flavor. I cook the cornbread in advance, crumble it, freeze it, and put it out to thaw the night before.

If you live in a dry climate, you can let the bread and cornbread sit out and go slightly stale (the mixture soaks up more liquid that way). Otherwise, you can lightly toast the bread, if you want. But, you can also use untoasted bread if you prefer.

You will have bread left over after you assemble the dressing. This is okay --the exact amount you will need will vary depending on how dry it is and how much liquid it absorbs. Bread is cheap, and it is okay to throw some away (or feed the birds) -- but you don’t want to be left short when making dressing, trying to get more at the last minute.

I use two bags of frozen onions and 3 or 3.5 cups of chopped celery.

Most recipes call for a lot more celery, but unless your crowd is a big fan of celery, err on the side of adding too little.

Here's another version with sausage. Even though it is called a stuffing, it is a dressing, baked on the side. The pork sausage is best if it is seasoned with sage. No, I'm not biased, not at all. 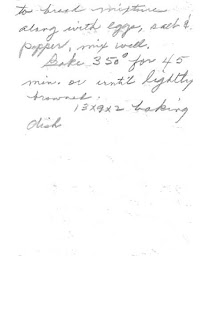 Soak bread in broth in a large bowl about 10 minutes. Stir until liquid is absorbed. Sauté onion and celery until tender. Add sausage and cook over low heat until sausage is browned. Drain. Add sausage mixture to bread mixture along with eggs, salt and pepper. Mix well. Bake at 350* F for 45 minutes until lightly browned. (Vada’s note: 13”x9”x2” baking dish.)

Stale sourdough biscuits work well in place of the bread, too.

Happy Monday. Find a good pile of leaves out there.
Posted by Unknown at 6:00:00 AM