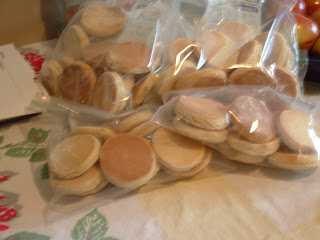 Part of the teacake shipment to Afghanistan
Dozens of teacakes are winging their way to a dear friend of the family who is in Afghanistan. I made two full-size batches and wound up sending 5 dozen to the war zone, 1 1/2 dozen to work, and the rest for us here at home. That was a major baking day. If you are interested in doing this, use the sturdiest peasant cookie recipes you have. Delicate doesn't cut it. I bagged the teacakes by the dozen just in case they do get broken during shipment, but am hoping that they make it there and make his day a little bit better. What I really want is an end to this war. For all sides. Next year, I want to give this man teacakes in person.

We are approaching the winter solstice very soon, and all our senses tell us that it is time to slow down, take a break, stay warm, and stay close to our loved ones. I associate holiday mornings with decadent sweetrolls and coffees, and we have some terrific recipes in the Simple Gifts files. They're even better if you eat them while you are still in your pajamas. Extra points if they have feet in them. Triple points if you actually wear the pink bunny outfit. Double-dog dare ya. By this time next week, the days will be getting just barely perceptibly longer and many of the holiday celebrations will be over.

Cinnamon rolls and breads are worth taking a little time and trouble to bake from scratch, one recipe from each side of the family. Once you do, you'll understand why friends don't let friends buy refrigerator aisle cinnamon rolls. I would bake the rolls from the first recipe at ~350*. These are very rich and yeasty. You can refrigerate them after the first rise if you are baking ahead of schedule.


Cinnamon rolls
4 T shortening
3 T sugar
1 ½ tsp salt
Mix and add 1 cup boiling water. Cool. Add 1 egg and 2 cakes yeast which have been dissolved in ¼ cup tepid water. Add 4 cups of flour. Mix. When the dough is formed pour over it 3 T cooled and melted shortening. Let rise until double in bulk, roll out to ¼ ” thick and spread on it 1 stick butter which has been melted and cooled. Sprinkle with sugar and cinnamon, chopped nuts or raisins. Roll and cut in slices and let rise again. Bake until done.
Glaze
¾ pkg. powdered sugar
½ stick butter
Enough milk to dissolve sugar
Heat until sugar is smooth and pour over rolls.
--Vada Brooks Johnson
Quick cinnamon buns
Sift together 2 cups flour, 3 T baking powder, 1 tsp salt. Add 6 T soft shortening, cut in finely. Stir in to make soft dough 2/3 cup milk.
Roll into ¼” rectangle 7” x 16”. Spread with mixture of ¼ cup sugar, 1 tsp cinnamon and raisins. Roll up tightly from wide side and seal edge. Cut into 1” slices. Place cut side down on greased cookie sheet or in muffin tins. Bake at 425* for 15 minutes.
--Dolly Shaffner Hess
Cinnamon loaf
1 pkg. active dry yeast
2 T warm water (105-115* F)
2/3 cup milk, scalded
½ cup sugar
2 eggs
3 cups sifted all-purpose flour
6 T butter or margarine
1 ½ tsp cinnamon
1 tsp salt
Melted butter or margarine
Sprinkle yeast into water. Let stand a few minutes, then stir until dissolved. Pout hot milk over ¼ cup sugar, salt, and 4 T butter. Cool to lukewarm. Add eggs, yeast, and half the flour. Beat with rotary beater or electric beater until smooth. Beat in remaining flour with spoon. Cover and let rise until doubled (about 1 hour). Punch down and knead lightly. Roll out on floured pastry cloth or board to a rectangle 18”x9”. Spread with 2 T butter. Sprinkle with ¼ cup sugar mixed with the cinnamon. Roll up tightly from the end and put in greased loaf pan. Brush with 2 T melted butter and let rise until doubled (about 45 minutes). Bake in moderate oven (350*F) about 30 minutes. Remove and cool.
This is another mix that is great to have on hand for visitors or lazy mornings.
Cinnamon coffee
1 tsp cinnamon
½ cup instant coffee granules
2/3 cup granulated sugar or equivalent sweetener
2/3 cup powdered milk or coffee creamer
Blend all ingredients in a blender until they form a fine powder, then store in a covered container at room temperature. To serve use 2 rounded tsp per cup of boiling water.
Variations
If you are REALLY feeling decadent and don't need to drive anywhere, and the occasion is really festive, try this. Shirley is a Bailey's fan and we need to make this for her soon.