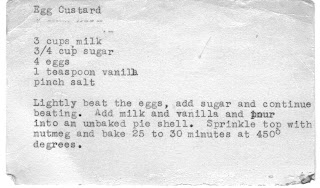 It's about that time of year when the cool, light desserts start sounding good. Not that there's a time when they don't....but even though the weather has been on the cool side itself here lately, the days are long, and lighter fare sounds better and better. Here are some great ways to end a long day, with minimal or no oven heating.

Jell-O, of course, defined an enormous number of recipes in the 20th century. If you're ever in the Rochester, NY, area, you can check out the Jell-O Gallery. There are a number of those recipes that are mercifully forgotten now--check out James Lileks's Gallery of Regrettable Food for some prime, hilarious examples--but this one is a keeper.

Here is another recipe from the cryptic series. We'd love to provide you the directions, but this is all there is. If anyone has any insights into how this was made, please send them on. Until then, we, too, say "Nuts."

Frozen Angel comes from a co-worker of Vada's, who worked in Lubbock for years at the Frontier Stamp Company. This recipe is written on a Frontier Stamp balance sheet form from the office. You can see from its condition why we are working to rescue recipes. 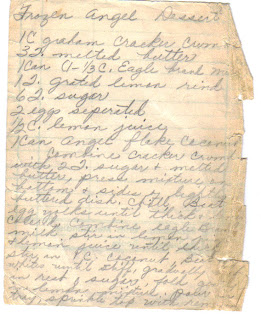 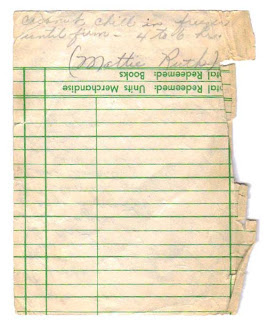 Caveat: Eagle Brand is sweetened condensed milk, NOT evaporated milk. They are not the same and are not interchangeable. Overlook this distinction at your own risk. Eagle Brand was invented by Gail Borden in the 1850s as an early way of combating food-borne diseases in pre-refrigeration days. Pre-refrigeration days were scary, especially in the warmer climates. This became a successful product as a part of military provisions in the Civil War. He is remembered, among other ways, by the state of Texas naming the county of Borden and its county seat of Gail, which is not far from Lubbock, in his honor. Texans of my grandmother's generation simply called it "Eagle Brand" in all recipes. You're just supposed to know what that means. Evaporated milk, which didn't come along until the 20th century, has 60% of its water removed, but no added sugar. The sugar in Eagle Brand is itself a preservative, which is why it was originally added.

Finally, here's a real classic that uses both evaporated milk AND sweetened condensed milk. That's a sure sign of a Texas recipe. NB: Fredericksburg, Texas, produces the best peaches on this or any other planet.

We all remember cranking ice cream in the hand-turned freezer. Funny how the grownups all set a good example by volunteering to do this at the beginning and encouraging us to follow their example at the end...