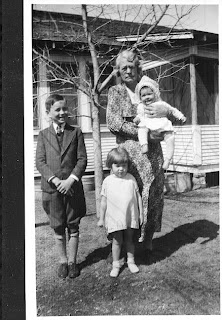 Mary Marcella Walker Brooks and children
All the signs point to another productive year up here for both cultivated and wild fruit and other produce. This is the third year of good rains after a seven-year drought. Look for the ongoing summer canning saga on these pages as the wild apples and plums ripen and the farmers' market expands. Right now the late spring harvest is just starting, and we're not seeing local fruit yet.

The cooks in our families were all farm girls or just one short drive away from the family farm, and they all saved every possible scrap of food for the winter months. Pickling and canning began in early summer and ramped up throught the first hard frost. That meant many days of boiling away in the hot months, but many more days of fruit in the cold months.

I have a little cookbook from 1934, The Art of Modern Cooking and Better Meals: Recipes for Every Occasion, by Meta Given, which I read every time I need to be reminded that I am a slacker. According to Meta, I should have 970 quarts of canned food put up to feed a family of 5 for a year, including canned meats. I'll get right on that, once I recover from testing her suggestion on how to find out how much pectin is in fruit juice, using equal amounts of the fruit juice in question and grain alcohol. You rock, Meta. We've been running this experiment every evening and will have scientifically significant results as soon as we can remember what it is that we are looking for.

Here are a few suggestions from the Simple Gifts files.

Cook fruit until done in very little water; remove from fire and squeeze through a flour sack. Put juice on fire and boil hard 10 minutes, add as much sugar as juice and when beginning to boil, boil hard 2 minutes and pour in glasses. The time is counted from the time it boils real hard.
--Mary Marcella Walker Brooks

Bear in mind that sugar is a preservative as much as it is a sweetener in these pre-refrigeration and wood-fire recipes. The high heat and sugar release and set as much natural pectin from these particular fruits as possible. Wild plums may need a little help in the pectin department if you want a firm-set jelly, something I don't think my great-grandmother's generation worried about too much as long as there was a good-enough set. They did, however, place a high premium on the clarity (translucency, if you will) of the jelly;  hence the straining directions.

Here's a more recent recipe that produces a lovely preserve. 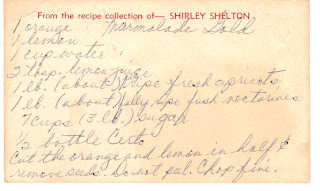 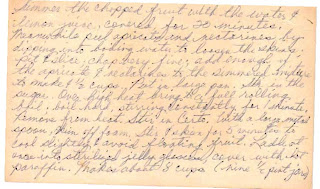 Cut the orange and lemon in half and remove seeds. Do not peel. Chop fine. Simmer the chopped fruit with the water and lemon juice, covered, for 20 minutes. Meanwhile peel apricots and nectarines by dipping into boiling water to loosen the skins; pit and slice; chop very fine. Add enough of the apricots and nectarines to the simmered mixture to make 4 1/2 cups. Put in large pan. Stir in the sugar. Over high heat bring to a full rolling boil; boil hard, stirring constantly, for 1 minute. Remove from heat. Stir in Certo. With a large metal spoon, skim off foam. Stir and skim for 5 minutes to cool slightly and avoid floating fruit. Ladle at once into sterilized jelly glasses. Cover with hot paraffin wax. Makes about 8 cups (9 half-pints).
--Shirley Johnson Shelton

If you are canning these in a hot-water bath, the paraffin is not necessary, and vice versa. Certo is concentrated fruit pectin, either liquid or powder.

Here's one for later in the summer. Note that this preserves the entire peach, and you will have to deal with the pits when you are serving them later. Trust me, you won't mind doing that. These are awesome. I'd let them stand for at least a week or two before opening them, to let the flavors deepen.

Select firm clingstone peaches. It is better to have them too green than too ripe. Peel and drop at once into a syrup which is made by boiling together the sugar and water and boil for 15 minutes. Cool quickly and allow to stand for from two to three hours. Drain off syrup, put vinegar and spices into it, boil for fifteen minutes, then add the peaches and cook together for half an hour. Let stand overnight. Next morning, drain off the syrup, boil for twenty minutes, add the peaches, and continue cooking for fifteen minutes longer. Cool again and let stand for two hours or overnight, then boil all together until the peaches are clear and tender. Pack peaches into cold jars, garnish with snips of stick cinnamon, cover with strained syrup, seal, and process quart jars for 20 minutes at 180* F (simmering).