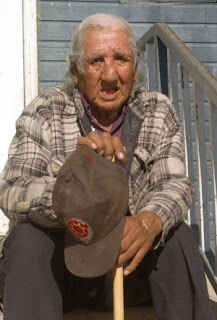 Clarence Wolf Guts sits on the steps of his son's home in the town of Wanblee on the Pine Ridge Indian Reservation in South Dakota. (Steve McEnroe/Rapid City Journal)
I have been awed by the saga of the Navajo code talkers for as long as I can remember knowing about them. The brilliance of encrypting messages and references in an ancient language, a code that simply could not be broken, is incredible. Heroism is so often overlooked in the quiet corners, where it happens just as often as it does in the large arenas.

What many people do not realize is that the Navajo were not the only Native American tribal group recruited as code talkers in the Pacific campaign of World War II. There were at least 18 groups, including soldiers from South Dakota. The last of these men, Clarence Wolf Guts of the Oglala Lakota Pine Ridge Reservation, died last week. He was one of 11 Lakota, Nakota and Dakota speakers recruited for this effort, and he was just 18 years old when that happened. He came home to no recognition and had a very difficult time dealing with post-war stress, but had become a speaker on the subject of the code talkers for the last decade. Thanks to the Code Talkers Recognition Act of 2008, the service of these warriors has finally been honored.

Today the flags in South Dakota will fly at half-mast in his memory. As Governor Rounds is quoted as saying in the Rapid City Journal, "Clarence Wolf Guts and other code talkers were true heroes...They turned their Native American languages into codes that our enemies never were able to crack, and that helped win the war against Japan and Germany."

The Lakota code talkers relied on a phonetic alphabet based on Lakota that they used to create a unique Lakota code. Clarence Wolf Guts and his cousin Iver Crow Eagle Sr. traveled from one Pacific island to another in the thick of battle, transmitting messages constantly from the generals to the chiefs of staff.

Unlike the Navajo, they did not create a written dictionary, and it is possible that the Lakota code has been lost to time. As the Mendota Mdewakanton Dakota Community site somberly notes, "It would be difficult to form a Lakota code-talker unit today because most of the estimated 8,000 speakers are elderly people and few young Lakotas can speak the language fluently."

Here is the deeply moving opening line from the Rapid City Journal's story by Holly Meyer:
"When the towers of the World Trade Center fell on Sept. 11, 2001, Clarence Wolf Guts asked his son to call the U.S. Department of Defense to see if the country needed his code talking abilities to find Osama Bin Laden."

And here is the best line of all, from South Dakota Magazine:
"He learned Lakota from his grandfather, Hawk Ghost, and his grandmother, Hazel Medicine Owl. 'My grandfather taught me the facts of life and the Lakota language,' he said. 'He told me "you'll go to school and stay in school.' But he also said to speak Indian because 'you'll need it later in life.'"

We owe these warriors a greater debt than we will ever know. Their radio exchange of information is credited for many battle wins and the saving of many Allied lives in the Pacific theatre. Thank you for your courage, Clarence Wolf Guts. Pilamaya ye.
Posted by Unknown at 6:00:00 AM

I was unaware of the existence of this group of men until a movie came out about them several years ago. Their dedication to this country seems even more astounding when one considers what they as a people gave up. Surely there must be an ethnographer somewhere who can at least start some kind of study of the Lakota language. Much like species extinction, when a language disappears the world is poorer for its loss.