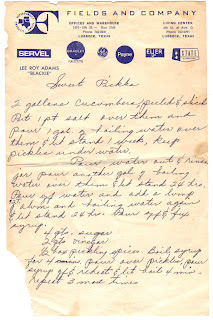 It's not looking like the best year for the wild fruit--hailstorms and grasshoppers were our plagues of the 2010 season--but there should be enough for a reasonable run of plum jelly, apple butter and those decadent little pickled crabapples. I'll have the fruit recipes up next week. In the meantime, the cucumbers and squash are coming in nicely. Here are a few sweet pickle recipes from the files.

This recipe makes terrific pickles, but is a bit high-maintenance; it calls for reheating and repouring the pickling syrup four times. As always, be very careful when you are dealing with a hot sugar syrup. Do all your pouring over a sink with the pan tilted away from you. Sugar syrup burns are awful. With that caveat in mind, try this one out: the results are wonderful. I would let these stand for at least two weeks before opening, and a month might be even better for the flavors to mature.

Pour off and fix syrup:

Does anyone use alum in pickling any more? I remember it as a staple in my grandmother's pantry.

This was transcribed as written from Gran Brooks's penciled recipe notes. I use large white enamel stockpots for this kind of preparation. Obviously, Gran Brooks assumed that you know how to can these once they boiled for three minutes, no more no less. If you will be using them soon, they can be refrigerated; otherwise, crank up the canning gear.