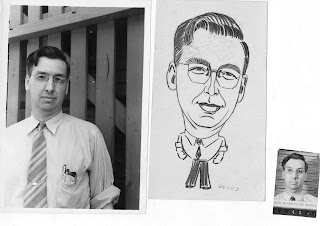 This post is dedicated to the memory of Mack Johnson, father, grandfather, draftsman, and family anchor. Today marks 108 years since he was born. These pictures you see above are a bit different from the usual family shots. They date from his work in WWII at the top-secret military glider facility in Lubbock.

Mack moved his family from Altus, Oklahoma, to Lubbock in 1937 to work as an architectural draftsman. He was self-employed in this field for the rest of his life, working literally up to the last week of his life at the age of 85. His astounding work ethic was typical of his region and generation. Mack was grateful for a job after the ravages of the Depression, and loved Lubbock and the opportunities it afforded him. He designed and built the family's house, was a pillar of First Methodist, and doted on his family.

We knew all of that. What we did not know (well, at least the grandchildren did not know) was that he joined the war effort at the outbreak of WWII as a civilian employee of the military. The U. S. Army Air Force set up a training and design facility in Lubbock, and most of the military glider pilots in the service trained there. Mack was too old to join the service at the age of 40, but not too old to help out as an employee.

Not a lot of people know about this operation, and even as a civilian employee he considered it wrong to talk about it, ever. Like many WWII, Korean War and Cold War workers, Mack kept the details of his wartime service to himself. I wish I had known enough to ask questions while he was still here. This generation has been notoriously difficult in the oral history interview department. Their patriotism did not include loose lips.

If you want to know more about the WWII glider program, check out the Silent Wings Museum at this site, housed in the original Lubbock Municipal Airport building.

Many of our heroes are silent. Happy birthday, Pop.
Posted by Unknown at 12:00:00 PM