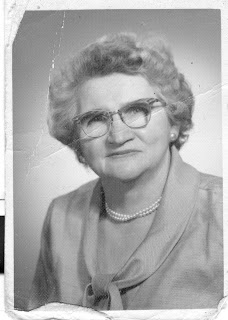 Myrtle Minerva Deppe Shaffner, Gene's grandmother
The recent wave of day-by-day Civil War Sesquicentennial accounts from 1861 news stories keeps reminding me that we could play out the whole conflict in our own house. I have all the Confederate relatives; Gene is a good Pennsylvania Dutch kid with deep German roots (and a Swedish line as well). There seems to be no crossover: he has no Confederates in his genealogical attic, and I can't find anyone on my side in a Union state by the time the Recent Unpleasantness broke out.

What surprises me is how similar some of the old family recipes are between our families. Maybe I shouldn't be surprised--the Honnolls in my family were of German origin, after all--but I would have thought that generations of increasing Southernness (if that's a word) would have caused a bigger recipe drift (if there is such a thing) than it did.

Gene's maternal grandmother Myrtle Deppe Shaffner came from a family of 18 children in the Berwick area of Pennsylvania. They were all farmers in the Susquehanna Valley area, raising crops and dairy cattle and, well, obviously, children. Some of the Deppes married their first cousins, also Deppes, which means that I have double Deppes in the genealogy, and that is one very different-looking family tree. But they were staunch German Methodists, and so were the Honnoll Confederates. I wonder if they couldn't have worked things out over a big Oktoberfest dinner, and skipped the war.

Here are a few recipes from the Shaffner side, guaranteed to please the palate and frighten the heart. The first one should have been run the day before Shrove Tuesday (=Mardi Gras), but this way you get nearly a year to get your heart ready for the delights. All comments are from Gene's mom Dolly, who would have been 76 this year. She collected the recipes from her family for years, and we are scanning them now.


Fastnachts
These are German doughnuts made eaten on Shrove Tuesday, the day before Lent begins. They are best eaten the same day they are made.

NOTE: Mother used to make these wonderful goodies. I would get off the school bus and hurry up the lane through wind and cold rain, usually in March, and when I opened the door I would be greeted by the aroma of sizzling dough. Although I’m not much of a doughnut lover, I enjoyed a few doughnut holes. Yes, they were made on Shrove Tuesday and they were devoured by Dad and my sisters and brother as fast as she could turn them out.

*We also like cinnamon sugar on them. Just mix a bit of cinnamon with sugar & roll fastnachts in it. If you have a tin shaker, you can sift it on.
--Dolly Hess