Bridges on the river Platte: the crane report 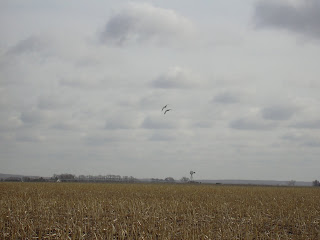 Sandhill cranes arriving in fields near the Platte River, Hershey, Nebraska
Two years ago, new to South Dakota and the Northern Plains, knowing not a whole lot about the region, Gene and I were cajoled into leading a bird club trip down to the Platte River in east-central Nebraska to view the sandhill cranes arriving as part of their annual migration. We had few ideas about what to expect and no preconceptions whatsoever. We were given maps to a bridge over the river near Hershey, Nebraska, and told that the sunrise lift-off of hundreds of cranes from an upstream overnight resting site was a spectacle worth the time and trouble of getting up in the freezing dark and finding the unlit bridge on the tiny road.

We were informed correctly. And we have joined the ranks of the people who come from all corners of the world to watch the Nebraska spring crane arrival. The scientific term for such people is "craniacs," and we are deeply afflicted with the condition. 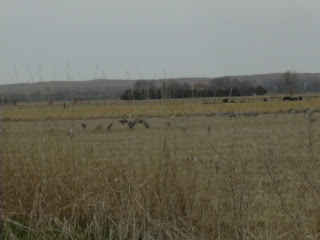 Cranes displaying in the field
The sandhill cranes of Nebraska have been arriving there for millennia, before there even was a Platte River. They have been wintering in the sun in Texas, in New Mexico, and even down into Mexico. I learned about them in their wintering sites in Texas and New Mexico from early childhood. At some point in March, the light changes, the days lengthen, and they start the long flight north. The Lesser Sandhill Cranes, which congregate around the Hershey area, will go on to the high Arctic and Siberia to nest and raise their young (which are called colts, not chicks). They rest on and in the broad, shallow Platte, and feed in the surrounding fields all day long, building up resources for that next long flight. 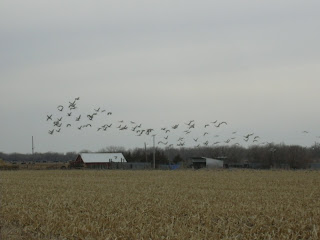 Cranes in flight
The cranes are feeding and pairing up during the day, gleaning waste corn from last year's crop. They drift across the roads in the area all day, sometimes in tiny groups, sometimes in huge flocks, calling almost constantly with that ageless trilling call. 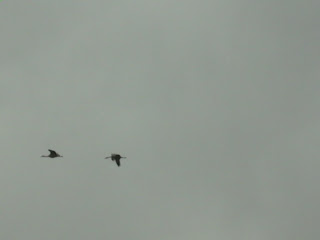 Crane pair
We spent Friday driving, surveying the feeding flocks. There is a Common Crane (a Eurasian species) that has been reported with the Lesser Sandhill Crane flocks for several years now. One was seen this year in our area, but not by us. We were, as always, transfixed by the sight and the calls of these lovely and graceful birds. Our friend Thomas Labedz, who graciously met us and shared his expertise for the weekend, said something that resonated deeply with my own experience: after thirty years of working with cranes, he doesn't have to see them, but he does have to hear them. The sound of their calls wraps around our hearts. 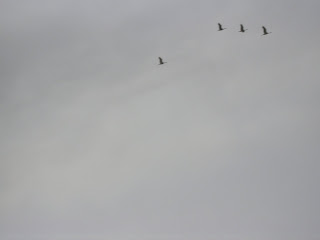 Group of three cranes and companion
Thomas also educated us on a couple of other points: 1. a group of three cranes flying together, as in the picture above, is almost always a family group of the parents and last year's colt, and 2. the colt has a distinctive "baby call" very different from the call of mature adult cranes. It is a higher, softer call, once heard, never forgotten. Cranes live for up to thirty years and form lasting pair bonds. Those calls keep them linked. 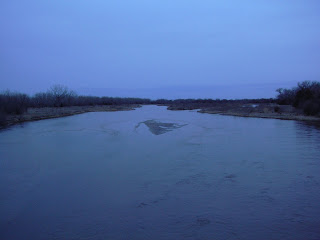 Hershey bridge on the Platte, looking downstream, as early in the morning as the camera and I could focus. At this point we had been on the bridge for an hour or so, sans caffeine.
We got up very early on Saturday and found that we had the bridge outside Hershey all to ourselves. It was very cold and a bit windy. We had heard the cranes talking amongst themselves as they settled in the night before, and the morning was more of the same: there was constant crane chatter, and small groups flew up every now and then to head to the field. 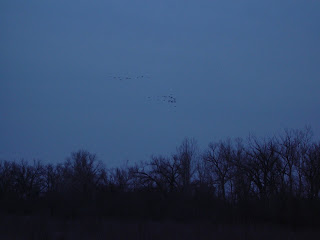 Distant group of sandhill cranes rising up. The sound was deafening. 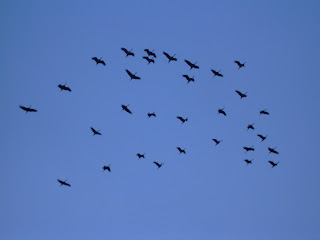 Close-up of crane-rise at sunrise 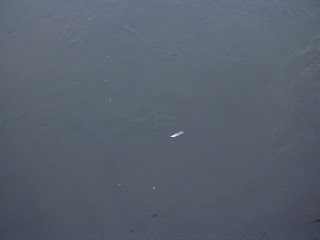 Solitary crane feather drifting downstream after the crane-rise
We were transfixed, standing there against the bridge railing. It is estimated that there are 500,000 sandhill cranes in the Platte River valley all across Nebraska in late March. There were thousands of them at the Hershey bridge alone. 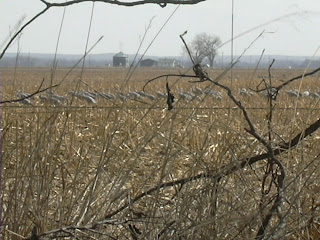 Cranes in the field, framed by the fence
The wind continued to build during the day Saturday. You may be able to tell that the cranes in the flock above are nervous and wary, facing into the wind, not feeding. After surveying the field again, we left Hershey and birded our way to the Kearney area for round 2. 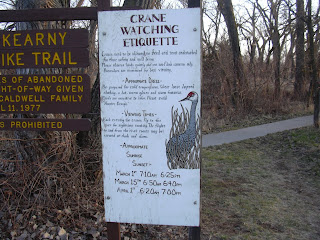 Fort Kearny crane-watchers' sign
Kearney, Nebraska, and its surrounding region have embraced the craniacs. We were there during the weekend of a crane festival at the Rowe Sanctuary downstream. Our friend Thomas recommended that we go to the viewing bridge at Fort Kearny (yes, the spelling is different) for the sunset and sunrise watching. In Hershey, we had a tiny roadway bridge to ourselves, with only the occasional sheriff's deputy to talk to (and the occasional monster pickup to zoom past). At Fort Kearny, there were dozens of people on the quarter-mile bridge span, watching and waiting. 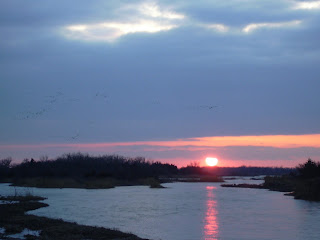 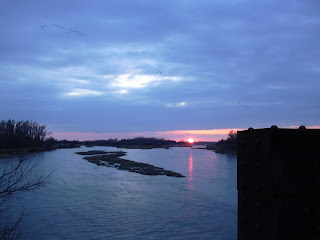 Sunset on the Fort Kearny bridge, with distant cranes
The Platte River at this point is much broader, though only a fraction of its historic self, when it sprawled across the valley and was described in early records as "a mile wide and an inch deep." At Hershey we were on the North Platte fork, which comes down from Wyoming. Just outside the town of North Platte, it joins up with the South Platte, coming up from Colorado. The Platte defines the state of Nebraska in so many ways.

We watched huge flocks of Lesser and Greater Sandhill Cranes drifting in with that odd elegant grace of theirs, until the light was gone. On Sunday morning we were again on a bridge in the dark, listening, waiting for the light and the flight.

We were not disappointed. Here is what crane-rise at sunrise looks like from the Fort Kearny bridge. 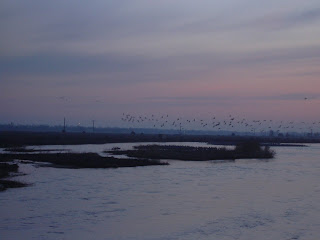 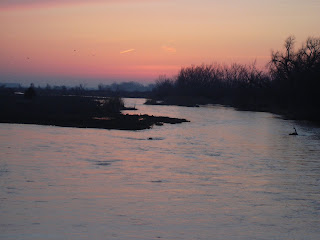 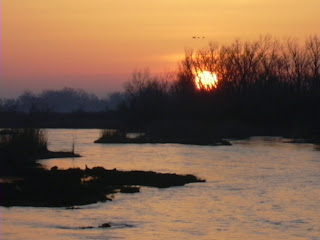 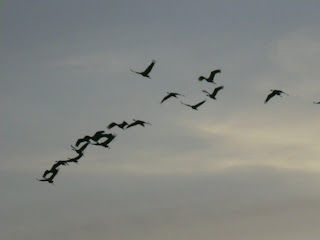 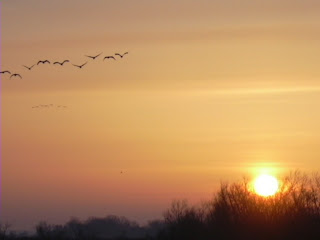 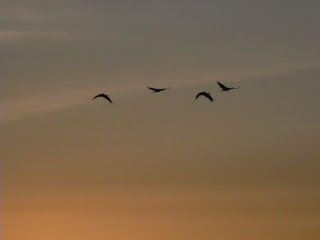 We could not get a decent picture of the last and best sighting of the day: a Whooping Crane feeding in a field at Grand Island, 40 miles downstream. This may have been the rarest, most endangered bird I have ever seen, probably 1/4 mile away from us. It was graceful beyond belief, at rest and in flight.

They will be back next year, and so will we. 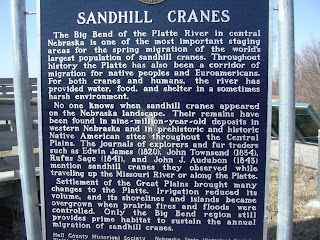 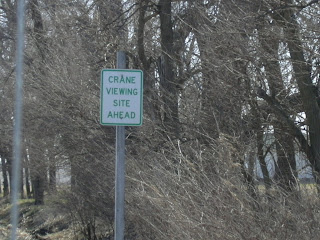 Thank you again to my parents for the gift of cranes.
Posted by Unknown at 7:16:00 PM