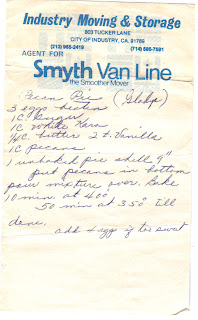 Yes, I realize I should have posted this for Pi Day (March 14 at 1:59; you math geeks types will get it), but I have an excuse. It's not signed by my mother, but I do have witnesses. I was off in Nebraska preparing to do a series of lectures the next day, and I didn't have the foresight to do the prescheduled pie posting instead of the prescheduled cake posting last week. So sue me. The complaint line forms at the left; take a number and wait to be called.

Here are three classic pie recipes from the Simple Gifts files. Gene and I have somehow fallen into the pie-baking niche of the family, and these are a few favorites. The first one, another one written on a moving-company scratch pad, is for a classic southern delight, pecan pie. There is not a Texan or other Southern type alive who doesn't believe that his/her version is the best on the planet. Gene believes that his Virginia version is better than this one. So be it. He is, of course, misinformed. He is, of course, from Delaware.

This needs some interpretation, stat. That's 4 eggs total, not 4 eggs added to the 3 you already mixed. You do not want this to be a 7-egg pie. Trust me on this one.

Here is a particular family favorite.

When the Johnson family would go to the Brooks farm in Littlefield on Saturday morning, Gran Brooks usually made a caramel pie because it was Shirley’s favorite. To this day, Shirley associates caramel pie with Saturday nights at the farm.

For a reliable meringue, try this.

Blend cornstarch and cold water in a saucepan. Add boiling water and cook, stirring until clear and thickened. Let stand until completely cold. Beat egg whites at high speed until foamy. Gradually add sugar and beat until stiff, but not dry. Turn mixer to low speed and add salt and vanilla. Gradually beat in cold cornstarch mixture. Turn mixer back to high speed and beat well. Spread meringue over cooled pie filling. Bake at 350* F for about 10 minutes. This meringue cuts beautifully and never gets sticky.

Finally, just to keep you in a meringue frame of mind, here is a classic lemon pie. We have two lemon meringue pie recipes, and one for lemon chiffon that is indistinguishable from the first version of lemon meringue. Since it's called lemon chiffon on the card, we'll go with that name. The results are just as wonderful. 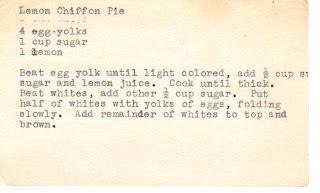 Footnote: yes, we make our own pie crusts. This is apparently the part that intimidates many people. For a wonderful account of pie-making and its decline in America, read American Pie: Slices of Life (and Pie) from America's Back Roads, by Pascale Le Draoulec. I have been tempted to drive across the country with a rolling pin mounted on the bumper ever since I read this terrific book.

For a dependable pie crust, try this:

In a mixing bowl, stir together flour, salt and sugar. Cut in shortening just until incorporated. In a 1-cup measure, beat the egg or yolk. Add vinegar and ice water and stir well. You should have about 1 cup of liquid in all. Very slowly, pour liquid into flour mixture. While pouring, mix with a fork until it clumps together. If too sticky, add pinches of extra flour. If too dry, sprinkle on a bit more water. Divide the dough into 2 pieces. Chill, then roll out into a circle slightly larger that the pie plate. Fold dough in half, place in pie plate, and then unfold. Makes 1 double-crust or two single-crust pies.

It's fun and it's better than anything you can buy. Happy Monday.