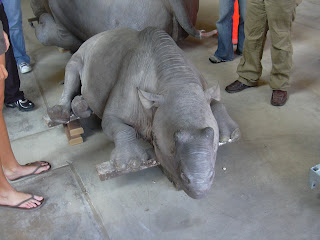 Baby Emma at the beginning of her first move in 2009
Dad and Mom had been kept in storage for just over a year, because there was no place to put them. The baby brontothere, however, was newborn-brontothere-sized, small enough to move to the museum until the new building was ready. And so we did that, partly to protect her and partly to act as a spokesmodel for the new building plans.

The students were able to pick her up, load her into a truck, and carefully drive her to the museum. We did get a few phone calls from concerned citizens wondering just what kind of animal our students were driving around campus. At least one person flatly refused to believe that it was not alive and was strongly suggesting that we were mistreating livestock. I consider that another tribute, however inadvertent, to Blaschke's genius. 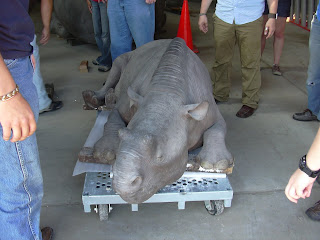 The baby is readied for moving. 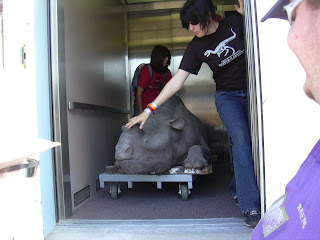 Michelle and Red steady the baby on the freight elevator. 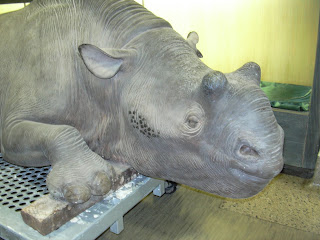 The baby is in the museum, ready to be lifted into the exhibit area.
We held a naming contest for the baby, open to school children in the area, complete with a coloring contest. The winning entry was "Emma," selected by three young ladies independently of each other. We kept promising people that Emma would be reunited with her parents when the new building was ready. We hoped that this would be done someday. When the day arrived, however, it was a little emotional on the museum floor when Emma left.
When Mom and Dad were in place, the crew picked up Emma at the museum and brought her over. 15 minutes after she was picked up, the reunion was complete. 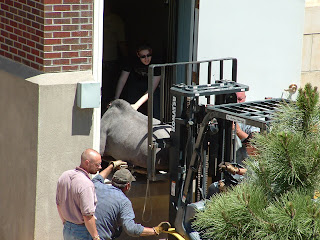 Emma is taken off the freight elevator under Red's guidance, less than a year after the last time she was on it. 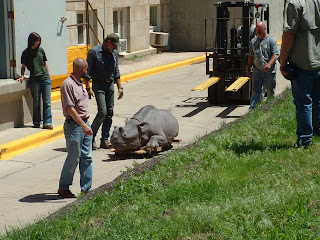 The forklift is maneuvered carefully under Emma. 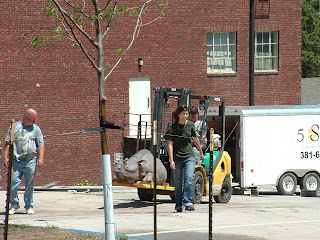 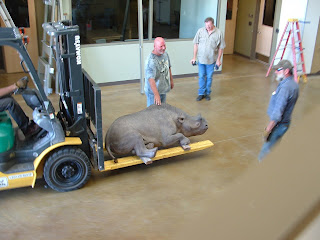 Emma enters the building. She never had to leave the forklift and rode serenely like a princess all the way. 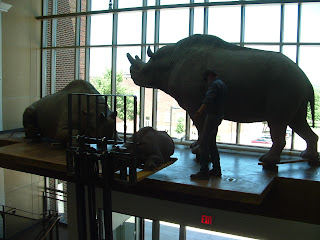 The family is reunited, as we promised, as we hoped. 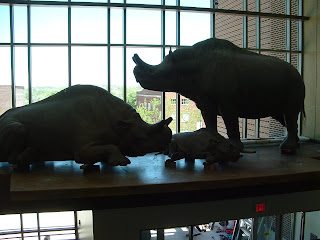 A huge sigh of relief can be heard even now, as all the equipment is gone and the Blaschke brontotheres are in place. Now comes the diorama work. Come see them in September!
Posted by Unknown at 6:00:00 AM