March 13 — Moment of Strength: share a story where a female ancestor showed courage or strength in a difficult situation.
March 14 — Newsmakers? Did you have a female ancestor who made the news? Why? Was she famous or notorious? Did she appear in the social column?
March 15 — Write a six-word memoir tribute to one of your female ancestors


Watch me do all three. 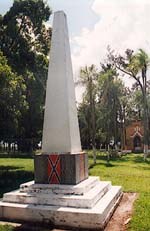 Picture by Dan Ellis 1/20/2008
The Campo Cemetery in Santa Bárbara d'Oeste, in the State of  São Paulo, Brasil.

The women in the Brooks line of my mother's family are notorious famous for having steel spines, great coping skills and the genteel tact and diplomacy of a wounded mother bear. Their history is nothing but courage and strength. I have yet to find a branch of the family that wasn't devastated by war. One of Nancy Honnoll's siblings died at Richmond. They were all too familiar with childhood and childbirth mortality, failed crops, killer storms, and epidemics that laid whole families low.

For the next few years, the United States will be in the midst of the 150th anniversary of its Civil War. I was not planning to focus on that until yesterday, when I stumbled into the saga of the Confederados and discovered that my father's side of the family had a story to tell that neither Ralph nor I had ever heard before.

The monument pictured above marks the American cemetery in Santa Bárbara d'Oeste, a city in the state of São Paulo, Brazil, where Confederate soldiers and their families moved en masse in the 1860s. They were broken and angry, facing a ruined land and a bitter Reconstruction, and so they left. One group left central Texas in 1867, a group full of Keeses and Hardemans and Seawrights and others, leaving South Carolina and Georgia and Tennessee behind for good. They had first moved to Texas because it was not blighted by battles, but the anger and grief were still too much, and so they set off for a new life with no reminders of the old one.

Nancy Caroline Keese was the daughter of George Washington Keese. She, her husband Thomas Lafayette Keese, her husband Peter Hardeman, and their familes were part of this exodus. They were children of George's first wife, Helen Clarissa, who died in 1848. George remarried Harriet Adeline Perkins (born in Vermont) two years later and started a new family, including my great-grandfather, George Washington Keese Jr.

Loss of a parent, a new Yankee-born stepmother and stepsiblings, the horrors of the Civil War...apparently Thomas Lafayette and Nancy Caroline had enough. Their trip to Brasil was one-way. Their descendants became part of Brazil and only rarely returned. Today there is an annual celebration of the Confederados, including replica Confederate uniforms (splendid dress uniforms at that), American Southern cooking and Civil War songs in Portuguese. The Confederate flag is displayed everywhere, with little or none of the negative significance it has here. There are still Keeses and Hardemans in Brazil. There is still a town called Americana.

The cemetery was set up to serve as the resting place of the overwhelmingly Protestant Confederado community, who could not be buried on Catholic grounds.Thomas, his son Thomas Alonzo Keese, and Lt. Hardeman's names are on the monument, along with dozens of family members.

Nancy's is not. I've identified a dozen of our relatives on this monument, and hers is the most striking absence. Is she there and just overlooked by the chronicler? Is she in an unmarked grave? It's certain that she did not return to the United States.

How did she find the strength to leave her country for an unknown place a hemisphere away? How did she cope with children fluent in a new language? Did she leave the little expatriate community at any time? No matter what one's feelings are on the American Civil War (and they are still deep feelings), emigration as an adult is bitterly difficult.

She was famous in a way--many families were torn apart by the emigration, and many of the emigres are today the only stories still told from that generation. In my father's family, though, it was as if they had never existed by the time Ralph was old enough to hear family stories. This was never mentioned in any way whatsoever. He has cousins in Brazil, which for us is about as exotic and unbelievable as can be imagined. His great-grandfather had older half-siblings who left the country forever.

Today Ralph and I are tracking our family's role in this story. It's a father-daughter effort, and it's addictive stuff. But we don't forget that every record was a living, complex person.

Sally,
I have enjoyed reading your blog and would like to award you with the 'One Lovely Blog' award. See my Blog www.alanna-fant.blogspot.com for details and to pick up your award.
Alanna

Sally,
I have enjoyed reading your blog and you will be interested to know that it was sent to me by a friend in Brazil.
I would like to correspond with you about the Hardeman and Keese family. I am a descendant of Thomas Hardeman through his daughter Isabella Hardeman. I have tried to find out more about Peter Hardeman who went to Brazil. Please write me at
patgenl@gmail.com
Thanks, Pat Adams Lowe