Women's History Month challenge for March 4 — Do you have marriage records for your grandparents or great-grandparents? Write a post about where they were married and when. Any family stories about the wedding day? Post a photo too if you have one. 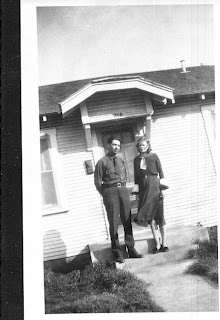 Mack and Vada, date uncertain, possibly after their move to Lubbock.
Do we have marriage record stories.....
These are my maternal grandparents, McKinley "Mack" Johnson and Vada Vivian Brooks Johnson, possibly in Lubbock, Texas, where they moved in 1937. They were married in 1923 in Montgomery County, Arkansas. Mack was the youngest child of the local doctor, Dr. John Johnson, and his second wife, Elmyra "Myra" Elizabeth Wacaster Johnson. Mack was a good-looking boy and the first in the area to have his own car. Vada's family had recently moved back to Arkansas following the death of her father Newt Brooks in Homestead, Florida. She set her cap for Mack and got him.
At the time of their marriage in 1923, Mack was 21. According to the marriage certificate that Shirley has in the safe deposit box, Vada was 16.
Except that Vada was born in 1909.
You do the math.
That's right: Vada married at 14, even though her mother and younger sister tried to talk her out of it. Clearly she fudged the truth on the marriage certificate: the question is, did Mack know, or did she fudge the truth with him, too? Or were they all in it with the county registrar, since she was underage?
No one knows. We didn't find this out until long after the two of them were gone. They never fudged the truth with us. We knew that Grandmother married at 14 and didn't think too much about it. Times were different then, and harder. But we did not know that the marriage certificate told a very different story.
It was a very small, quiet wedding; that much we know. She wore her best dress, but not a wedding dress, which was common in that time and place. They moved to Altus, Oklahoma, with her mother, Mossie, who opened a boarding house. Mack became an architectural draftsman. Guinn was born in 1925, when Vada was 16. Shirley was born at home in Altus in 1933, and discovered, many years later, that she had no birth certificate, again not uncommon in those circumstances. Fortunately, that can be corrected now.
Whoever said "Truth is found, not in accounts, but in account books" should have a word with the registrar of marriages in Montgomery County, Arkansas, and births in Altus, Oklahoma.
Posted by Unknown at 6:00:00 AM

Wow! What a story! I can't imagine getting married at 14. Wow!