Women's History Month challenge for March 2 — Post a photo of one of your female ancestors. Who is in the photo? When was it taken? Why did you select this photo? 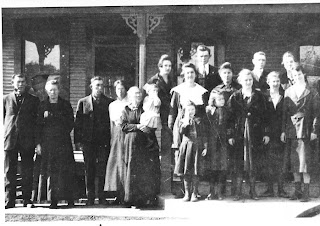 Brooks family portrait, date ca. 1917
I cheated and posted a photo of three of my female ancestors at once. I know I've posted this one before, but it bears a little explanation.

I don't know everyone's name in this photo (Shirley needs to weigh in on this one), but on the far left are my great-grandfather Joseph Newton "Newt" Brooks and my great-grandmother Mary Marcella "Mossie" Walker Brooks. I believe that the tiny older lady three people down is Newt's mother, Grandma Wren. Behind her next to the post is my great-aunt Coy McLean Brooks, standing next to my great-uncle Ernest Brooks. The two little girls below them are my great-aunt Gladys Brooks Strickland (who obviously did not care for the picture-taking session), and my grandmother, Vada Vivian Brooks Johnson, Shirley's mother. Several of the rest of the women are undoubtedly Newt's sisters. Ernest, Gladys and Vada were siblings. I am not sure if their fourth sibling, Jesse, is in the picture; he died young, a victim of leukemia. If he is in there, this may be one of the very few pictures of him.

Judging by Vada's apparent age in the photo, and her birth year of 1909, I'm tentatively placing this photo's date at 1917, plus or minus a year or so. This was taken in either Oklahoma or Arkansas. Again, Shirley needs to provide her expertise.

This photo always intrigues me for its look into family dynamics. Mossie, known to us in later years as Gran Brooks, was no fragile lily. She homesteaded on her own and only gave up her homestead to get married. 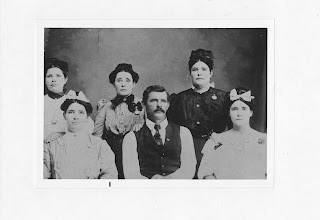 Newt Brooks and his sisters.
Mossie was a survivor. She may have been one of the last people who lived in a half-dugout in Texas, close to the present-day Muleshoe Wildlife Refuge, whose wintering sandhill cranes fly over us every fall and spring. I like to think that she loved their calls, too.

Mossie ran a boarding house in Altus, Oklahoma, after Newt's death, and many of the older recipes I've posted over the past year are hers, most notably the teacakes. Most of her recipes were never written down. More about her later in the month. 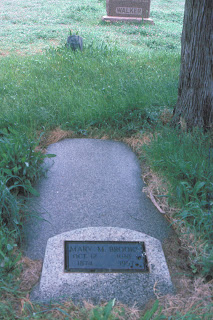 Mossie's grave in Victory Cemetery, Altus. Newt died in Homestead, Florida, and is buried there half a continent away.
P.S. Happy 175th Texas Independence Day!
Posted by Unknown at 6:00:00 AM

I also chose a photo that had three generations in it! What a great photo!!