Women's History Month challenge for March 10 — What role did religion play in your family? How did your female ancestors practice their faith? If they did not, why didn’t they? Did you have any female ancestors who served their churches in some capacity? 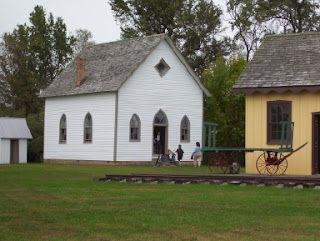 Historic St. Thomas Chapel, Dover, Delaware
Gene and I both have pictures of our respective parents' marriages in Methodist churches: his in Pennsylvania, mine in Texas. My maternal grandparents were rooted deeply in the life and activities of First Methodist. Everyone they knew was Methodist. My father may have raised a few eyebrows, being raised exotically Presbyterian and asking for forgiveness of debts instead of trespasses.

When I worked in western North Carolina, I heard a local historian and folklorist explain that, in the high Appalachians, the settlement or town generally tended to be all of one faith, depending on which flavor of clergyman first made his way into the deep woods and high altitudes. There was most likely not going to be more than one church built, so everyone lined up behind the banner of the belief that got there first. They were generally solid Protestant churches, nothing fancy or extreme, just places to pull the community together for two things we have nearly lost today: fellowship and mutual help.

For our grandparents, the term "community of faith" was absolutely literal. Their church was who they were. They came from a time when Sundays were all-day events, with Sunday school, services, a quick break for dinner (not lunch), and then singing with supper on the grounds afterward. As they moved to town and the churches grew bigger and grander, they clung to this pattern. The men went to men's Sunday school classes, the women to ladies' classes, and everyone participated in a few social and service circles during the week.

Both my grandmothers defined themselves by their churches and their participation. There were awards for perfect attendance, longest attendance, and greatest service. No life event happened without the church ladies being there with food and helping hands. Our older girls were and are teachers, not preachers, in their faiths. They led by example and service.

When I came across this recipe in Dolly's files, I was startled and initially appalled. Then I did what I should have done in the first place and read up on it. It's actually a lovely thing. Raisins were scarce, a real luxury food at one time. You didn't ever waste them. To have a whole pie filled with raisins was actually a loving and generous gift to a bereaved family. It celebrated the life of someone special and dear. Everyone brought enough food to get the family through a few weeks' worth of sad arrangements and adjustments. It was a promise from the community of faith that life would go on. You took this over, still warm, and helped out, knowing that someday you would be helped out in turn.

Our families' circles of faith were and are drawn to include, not exclude.
Posted by Unknown at 6:00:00 AM