Ralph and Shirley I

Women's History Month challenge for March 5 — How did they meet? You’ve documented marriages, now, go back a bit. Do you know the story of how your parents met? Your grandparents? 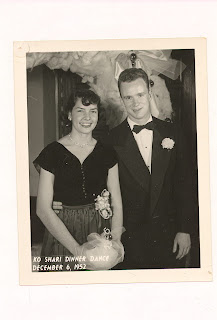 Shirley Johnson and Ralph Shelton, Ko Shari Dinner Dance, Texas Tech, 1952.
I don't know exactly how my grandparents on either side met each other. My parents, though: that's an easy story. Journalism at Texas Tech.

One reason the Johnson grandparents moved from Altus to Lubbock, Texas, was the presence of a good, new state college. Neither one of them went to college, but the Depression and general hard times made them fiercely determined to send their own children to college, no matter what. I think everyone in my mother's crop of cousins went to college, many of them to Texas Tech.

Shirley was a very bright student who skipped two grades and graduated from high school at 16. That happened in those days. She had (and has) a talent for writing and editing, and majored in journalism at Tech. In those days, that was primarily newspaper writing, photography and publication. By her senior year, she was the editor of La Ventana. 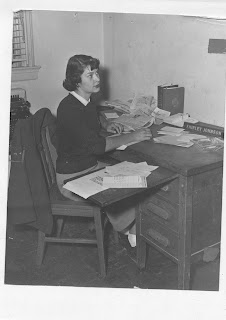 Shirley Johnson, editor, ca. 1953.
Meanwhile, in Dallas, Ralph Shelton Jr. confounded his family's plans and made his way to Texas Tech for college as a (you guessed it) journalism major. He is also a talented writer and editor. His great-aunt Blanche Keese Heaton had just moved with her husband, attorney Nathaniel Heaton, to Slaton, where he was the new judge. This gave Ralph a family connection in the area, and a bit of distance from his parents (he is an only child).

Ralph and Shirley are the same age, but grade-skipping put Shirley a year ahead of Ralph. They worked on the paper together. She was editor first, then he was editor the next year. The rest is history, and saved for tomorrow's post. 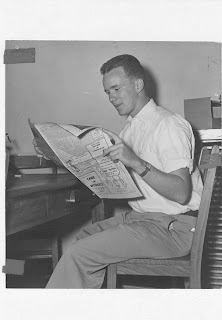 What a wonderful story and I love the photos!!

I went to high school with Ralph, we were roomates at Texas Tech for a semester and I the was best man at he and Shirley's wedding. I wish the two of them all the very best!