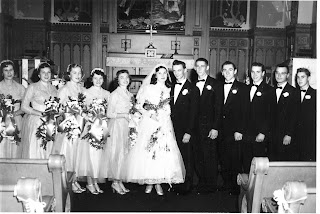 The wedding of Dolly Shaffner and Gene Hess Sr., September 18, 1954, Bloomsburg, Pennsylvania.
Our summer plans include intensive scanning of everything in Shirley's safe deposit box, including the marriage certificate and other light reading. Stay tuned for details. What I really want to do this summer is to scoop up Shirley and go on a photography road trip to all the old family towns and sites. That should be epic.

In the meantime, here's a story from Gene's side of the family.

In Gene's mom's papers, many of which we hope to scan and post here soon, is a copy of her marriage certificate. It attests that Hulda Shaffner and Gene Hess were married by Rev. Thomas J. Hopkins in Bloomsburg, Pennsylvania, in 1954. Nothing surprising about any of that until the end of the page, which attests that this is a duplicate license, issued February 24, 1966.

And this is heartbreaking.

You see, just a week or two before in 1966, Dolly and her children, including her two and several foster children, lost everything but their lives in a house fire in Ohio. Gene Sr. was serving in the Air Force in Okinawa and was able to come to them. They met at her mother's home in Delaware, where Dolly had taken the children. 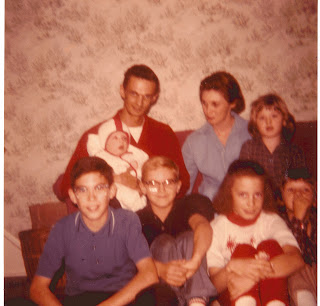 The Hess family post-fire in Delaware. Both Genes, Sr. and Jr., are on the left.
That was the last time they saw Gene Sr. In June 1966, he died when his C-130 went down on the way from South Vietnam to Okinawa. That's a post for another day.

It's amazing that the marriage certificate was replaced so quickly after the disaster. It is so typical of Dolly's character that she immediately got her family to a safe place and started replacing everything that was important, instead of wallowing in shock and self-pity.

This little certificate quietly tells an enormous story.
Posted by Unknown at 7:04:00 AM