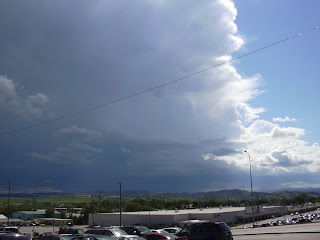 I've missed a few days here for no good reason other than the start of the spring semester. Everyone's back: students, faculty, volunteers, all needing to figure out what is happening and when this spring. More on that tomorrow.

Today we're keeping a wary and puzzled eye on the weather. The forecast for yesterday and the weekend includes, or included, ice, freezing rain, snow, freezing fog, and high winds, in varying amounts around the state, with possible glaciers moving in. OK, ignore that last one. So far we have seen about 10 minutes of light sleet. That's all.

The vagueness of the forecast was enough to make Gene decide to cancel today's scheduled bird club field trip. Driving around in the northern Black Hills means that weather conditions can change completely within a couple of miles, with changes in altitude and microclimate conditions. With forecasts like these, this is a tough call to make. Now the really bad weather is likely to hit tomorrow rather than today, and we have to wonder if we should have gone out after all. We keep telling ourselves that there wouldn't be any self-respecting birds out in view, anyway. That, children, is called self-serving rationalization. 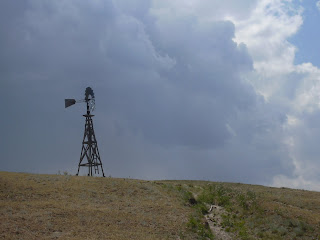 My problem is that I actually like bad weather, as long as I do not have to be out in it. Tornado Alley kids all too often turn out this way. We grow up watching some of the most violent and frightening storms that can be thrown at anyone, and wind up either terrified or fascinated, or both. I'm not a tornado chaser, but I do like watching the weather change and marvelling at the swiftness and occasional ferocity of prairie storms. With so much horizon to work from, the weather changes are incredible spectacles. Everything changes in a few heartbeats. 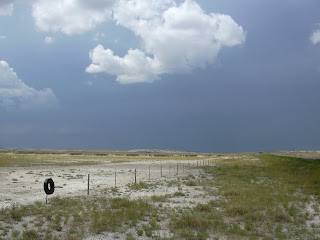 Badlands, South Dakota. Sometimes there is an eerie silence just before the winds roar in.

Before I moved out here two years ago, a colleague who went to school here in this same program reassured me that the winter storms were not all that bad. Really? Thanks, I said, that's good to know. No, he said, what I am saying is that you won't see most of the blizzards until spring.

And he was exactly right. 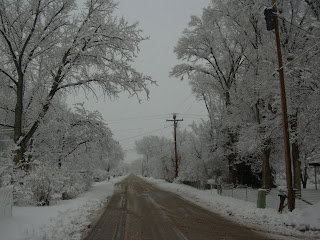 So we're not sure what tomorrow will bring--high winds and snow are likely, unless they're not. I am sure that I'll be watching, fascinated, with hot tea close at hand.
Posted by Unknown at 10:04:00 AM