Iceland: a look back 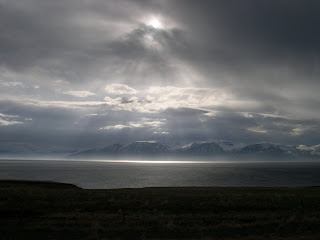 Want to bring conversations to a screeching halt? Tell 'em you took a working wedding trip to Iceland. In April. That's good for awkward pauses, disbelieving sidelong glances, and the odd snide "oh yeah, THAT'S romantic." But there are many parallels between life in Iceland and life on the Plains. In fact, I can see now why Scandinavian immigrants were attracted to the northern plains of North America. They knew this life already, this wind, this horizon. 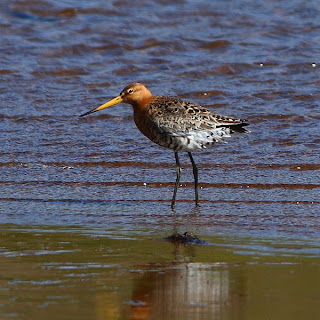 Gene actually received the invitation to go from his British Trust for Ornithology colleagues who worked on the shorebird banding project with him on Delaware Bay. The target species: the Icelandic black-tailed godwit, a spectacular large shorebird. In Gene's words: "The purpose of the trip was to find (resight) banded black-tailed godwits and to capture and band additional individuals. Resighting involves recording the band (ring) information and counting birds. This information can be put into mathematical models to estimate population size."

Me, I went along as the driver/ photographer/ captive geologist/ scribe. We joined up with a British team and had the trip of a lifetime. I'm not going to give a day-by-day account of it here, though Gene may want to post that later. These are just a few impressions of a stunning country. 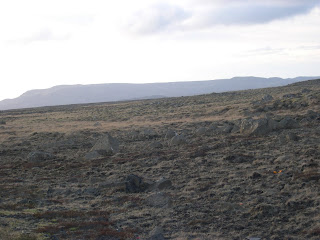 Lava field on the drive from Keflavik to Reykjavik


Iceland, while only about the size of Virginia, is growing. It is the only place in the world where the Mid-Atlantic Ridge is above sea level. Lava flows in both directions, creating eerie and near-lunar landscapes, volcanic craters, and odd flat-topped mountains created under the weight of glaciers. Fire and ice. NASA trained Apollo astronauts here for moon walks. 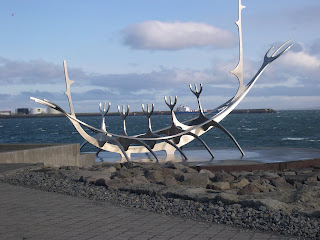 It's a country fiercely proud of its heritage. These are the Vikings. Foreign words are not imported into Icelandic. While almost everyone is at a minimum trilingual, Icelandic is kept as unaltered as possible. At every turn, I had the constant impression of looking into a deep well of time. Solfari, the famous sculpture of Reykjavik Harbor, is ready to go back to sea.

I only made one non-negotiable demand: before we met up with the Brits, I wanted to stay at the Hotel Geysir and see the phenomena for which all other geysers worldwide are named. 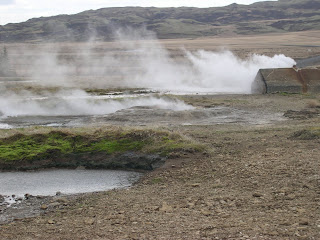 Driving in Iceland is not particularly problematic except for the weather. We were there for the last two weeks of April--winter when we arrived, spring by the time we left. The main Ring Road is graveled, not paved, because paving splits and cracks and falls apart every winter. You need 4WD, and we had that. The Hotel Geysir is right on the main road, which looks like a county road here--two-lane, graveled, little traffic. The geyser field is directly across the road, looking a bit like Yellowstone, steaming constantly. Strokkur erupts daily. 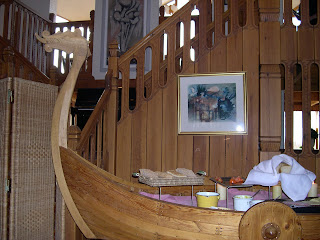 The hotel itself was a charming collection of cabins around a larger building. We were particularly intrigued with the Viking longship breakfast bar and would have smuggled it out in our luggage if we could. Woodcarving is a well-developed art here. Long winters.

We took a couple of tourist days in the southern part of the country to see sights such as Gullfoss, the icy (at that time, anyway) spectacular waterfalls through a black basalt canyon. That's ice all up and down the canyon walls. 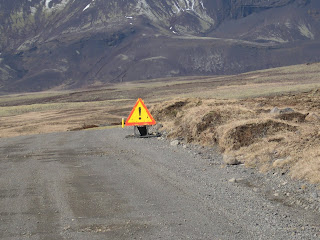 In some future post, I'll share Weird Signs I Have Seen Over the Years. None has ever been quite as unsettling as this one, see as we were heading into a tiny road through the passes to Þingvellir. We definitely paid attention after that, to just about everything, not knowing exactly what the main hazard was. Potholes? Trolls? Vikings? Editors? We knew it was most likely not wildlife. There are very few native mammals above the size of a rabbit. Geologically, this is a new island. The largest creatures we saw were cattle (a few) and the fierce little Icelandic horses, which are NEVER called ponies, even though they are that size. 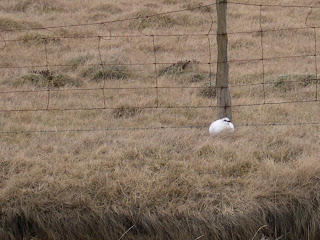 By then it was time to get busy with the birding. I was not sure what to expect, but neither of us expected to see a ptarmigan right by the side of the road. These are not easy to find and Gene wasn't counting on doing so....so naturally it was right there where we least expected it, doing its imitation of a tiny snowdrift.

For the rest of the trip, we were in pursuit of the elusive godwit, which was not nearly so cooperative as the ptarmigan...

We wound up driving around 2/3 of the Ring Road: the easternmost part of it was still closed due to winter. When we could take breaks, we did some driving and sightseeing. Some highlights: 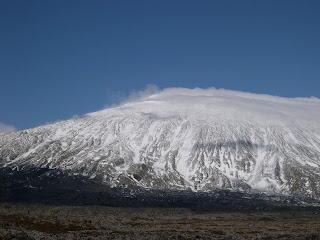 The birds we weren't looking for continued to turn out in profusion. 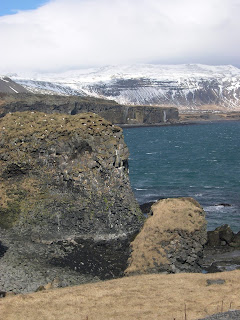 This lava tower in one little harbor housed a kittiwake in almost every cavity. 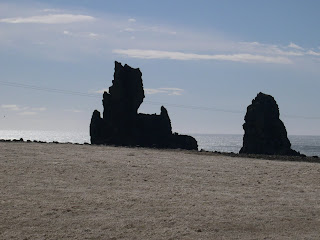 We saw these weird volcanic fragments on the horizon long before we arrived there, speculating madly as to just what they were. 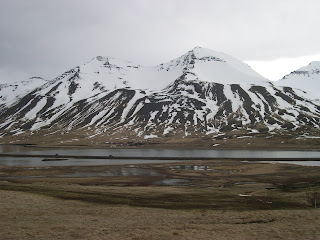 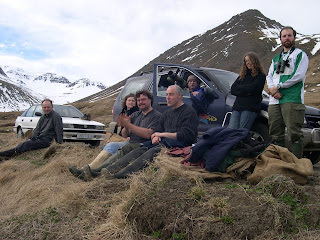 Someone got the camera away from me by brute force; I am second from left in the chest waders. In which I hope never to be photographed again in this or any other lifetime. Gene is manning the scope in the van. This is toward the end of the 8-hour wait. We waited very professionally. Birders are kind of nuts that way. 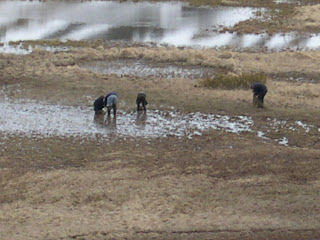 Cannon nets fire up and over the birds when they come down to feed, trapping them without injury. Speed, however, is of the essence once the fire has been made: they need to be documented, banded and released as quickly as possible. I'm hoping that Gene will post more about this whole process. 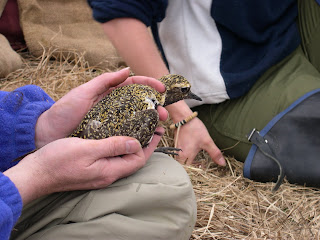 Gene is holding a European golden plover here for measurement and banding. The grip is very gentle. As important as documenting these populations may be, we'd rather have an escape than an injury. 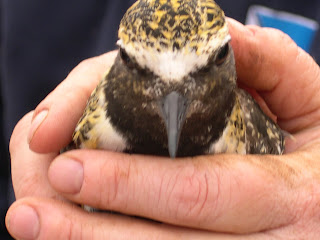 Another bird recorded for science...not that it's impressed. 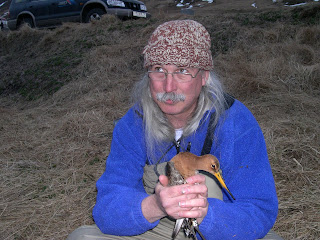 Finally we banded the godwits. You can see here just how large and strikingly colored they are. The bird is sporting metal and color bands, providing unique identification and a record of its initial capture to anyone seeing in later. One bird at a time, the database is built up, and our understanding of the population trends of these long-distance migrants increases. 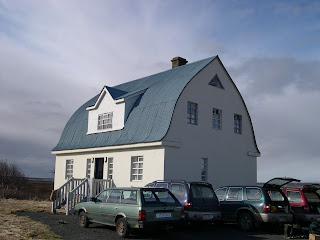 After the successful netting, we went to the university biological field station at Lake Myvatn, a geothermally warm lake that attracts scores and scores of waterfowl who like warm feet. Classic Scandinavian architecture here. 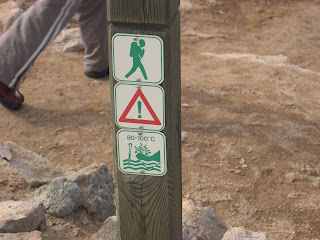 Myvatn is near Námafjall, an area of intense geothermal activity like Yellowstone and New Zealand. Being somewhat birded out, the group took a day to do a little touristing. Unlike Yellowstone, Námafjall has only a few boardwalks, no rails, and an understated warning system as seen here. You are responsible for yourself.

The MidAtlantic rift runs right through this area. You can, if you are a nerd like us, stand with one foot in Europe and one in North America, until your colleagues beg you to stop. The ground is constantly warm, and a major volcano, Krafla, is nearby. Icelanders have dug cylindrical holes in the hot soil for inserting bread bakers. The bread is a dense brown bread and is still cooked geothermally every day. 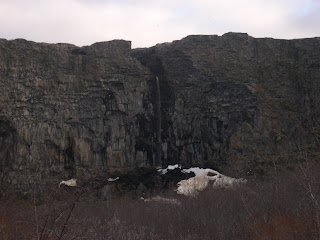 Our last real stop was at Ásbyrgi located in Jökulsárgljúfur National Park, a horseshoe-shaped canyon in the basalt. Mythologically, this is the hoofprint of Odin's eight-legged horse Sleipnir. Geologically, it's the result of catastrophic glacial flooding following the failure of an ice dam. 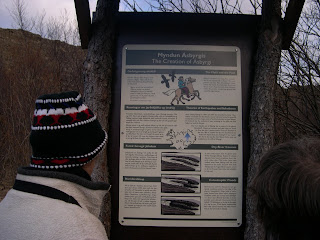 Do not get me started on eight-legged horses.

I'm leaving out a lot. It was an intense and incredible couple of weeks in one of the most spectacular places I have ever seen. Gene will probably weigh in with a more detailed discussion of the bird life. Here are a few parting shots: 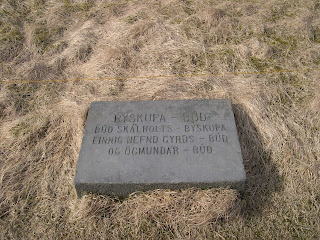 Site of a bishop's hut at Þingvellir 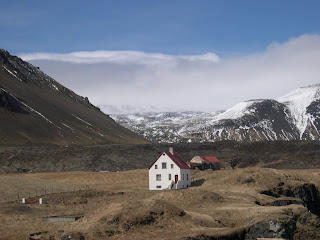 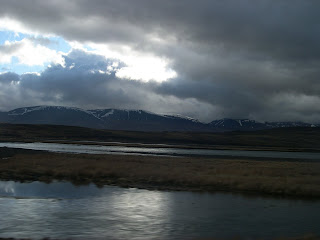 New Zealand has those exclamation mark road signs, too. When we were there they had had so much rain that moutainside roads were washed out, and since damned near every road is on a mountainside, you paid real attention!