Don’t pass it out 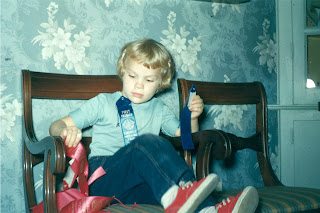 A few of the ribbons my grandmother won for her baked goods at the South Plains Fair, ca. 1960.


I've had a few questions about Family Recipe Mondays. The recipes are in fact all family favorites, most of them older than I am (which is no longer insignificant, alas). We have spent a long time sorting, organizing and scanning them so that everyone who wants a copy can have one, in the original handwriting and measurements. It's been a labor of love.

I have transcribed the recipes, and Gene has scanned them. I made the judgment call early on that I was not going to try to update measurements or ingredients. These are relics of their time. There are a number of them I will probably never make, but they are fascinating glimpses into the history of the family, time and place. I can tell the difference between a 1920s favorite and a 1960s favorite in many cases from the ingredients alone. And I am having fun sharing these.

My grandmother and her sister were just the opposite: they did not give out recipes to anyone except family and trusted friends, and sometimes not even then, even to each other, depending on the status of their relationship at any given moment. Cooking was the touchstone of excellence for them. They were good at it, but convinced that someone was going to take this from them somehow. So I have an occasional twinge when I post one of their recipes, knowing that they would never have done what I am doing now and putting them out for the world to see.

Dessert recipes were especially hoarded. Desserts were the proof of one's cooking prowess. The most elaborate desserts were variations on layer cakes and custard pies. Me, I've never tried the Nesselrode pie recipe below--and don't have any plans to do so; that is a LOT of maraschino cherries--but the warning at the end, from my great-aunt to my grandmother, reminded me of the recipe wars all over again. 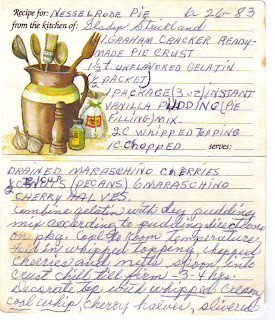 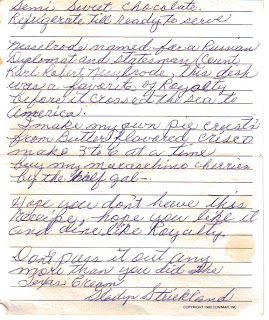 Gladys’s note: “Nesselrode [was] named for a Russian diplomat and statesman (Count Karl Robert Nesselrode). This dish was a favorite of royalty before it crossed the sea to America. I make my own pie crusts from butter-flavored Crisco; I make 3 to 6 at a time. I buy my maraschino cherries by the half gallon. Hope you don’t have this recipe, hope you like it and dine like royalty. Don’t pass it out any more than you did the Texas cream [pie].”

Well, she was right about the Count and the dessert (originally more of an iced custard) being named for him. I'm not sure that this early 1980s version has much connection to the original Nesselrode pudding, however. Women of my grandmother's generation weren't shy about jumping on time-savers like prepared pie crusts and instant mixes. They had, by that time, spent 60+ years in the kitchen, starting with wood-fired stoves, through gas to electric. Pies were still the test of their cooking skill, and a rich indulgent one like this was perfect for impressing a club meeting or a bunch of rowdy grandchildren.

So there it is. Use this and all of our recipes as you like. Some things are not really meant to be secrets. 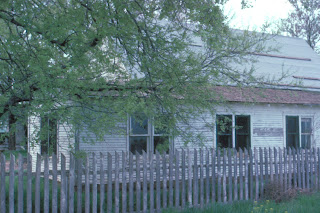