One of the most unfortunately ignored signs in the area

Every other weekend we load up the van with maps, notebooks, binoculars, scopes (OK, just one of those) and cameras, and head out for some quality birding time. This is Gene's specialty and passion. Some of these are trips with the local bird club, some are formal counts (Christmas Bird Count, West River Migration Count, etc.), and some are our own trips to various green patches on the map. We're still discovering South Dakota and its biological wealth, and have meandered all over the Black Hills, Badlands, and points west and south, driving on what the map calls unimproved roads. The map is an optimist that way. 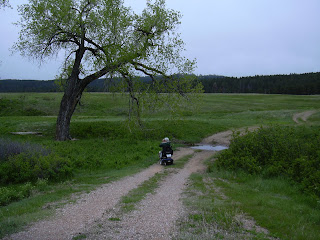 Gene can be relied on to find and identify the birds, especially shorebirds. While I navigate and take the official trip notes, I watch for everything else. Gene has his bird life list, his South Dakota state list, and other stats, because bird people love statistics and lists. An uncommon number of birders love baseball, possibly for the stats. An uncommon number of them are also spies or connected to spying; I think it's because no one questions them when they are using binoculars. I'm not making this up.

I find myself scanning for the rest of the wildlife out there, especially mammals. These remind me more than anything else that essentially I have moved home and am back where I started, even if I'm several hundred miles due north of the starting point. 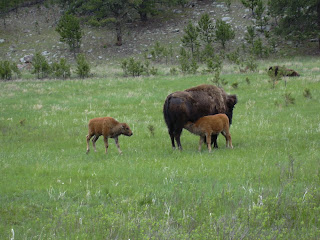 Gene didn't need to be warned about bison, but a lot of other newcomers and visitors do. Bison are not cattle, not that cattle are all that predictable, either. People routinely get into trouble out here because they think that bison are cute, slow and stupid. They may be cute, they are very fast, they are smart enough to be trouble, they have powerful horns and hooves, and they are not necessarily fond of people. Get between a mother and her calf, as I have seen tourists do, and you'll come away with a very different and more accurate impression of bison--if you come away at all. 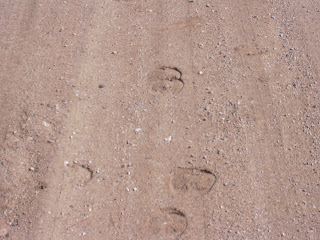 When we know that bison are in the area--which they often are at Custer, Bear Butte, Badlands, Wind Cave, and other places with serious herds--we stop and check before we get out of the van. Clearly we were not the first beings on the road this morning.

I love watching bison, and the phrase "ancient of days" keeps coming to mind. It took an enormous effort to bring their numbers back from the depredations of the 19th and 20th centuries.

Everyone watches the bison, including the coyote here who was trotting along near a huge moving herd. He is, of course, watching for an opportunity to feed on whatever turns up--rodents kicked up by the bison, bird eggs, grasshoppers, slow tiny bison calves, anything. 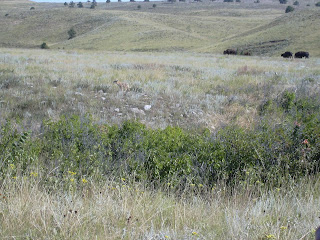 He's in there. Keep looking, slightly left of center. I wanted to show just how well camouflaged they are. This was in broad daylight, and it was my eagle-eyed brother who saw the coyote paralleling the bison herd, even though all of us were looking in that direction. Prairie animals are best seen by picking a single spot and watching it for a long time. Your eyes and your thoughts need time to adjust. The animals have a lot to do and a lot of ground to cover. The bison may be part of the charismatic megafauna, but there is a huge ecosystem at a smaller scale. 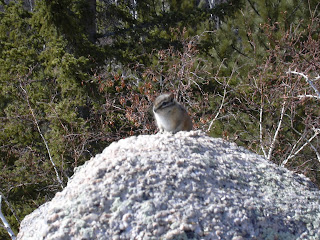 This least chipmunk, for example, was the sentry for a large group of her sisters and cousins and aunts that swarmed us at a parking lot, used to being fed by tourists. It's not a good idea to feed them. They need to be good locavores. They don't need to get exotic food. We flung out those handfuls of raisins in self-defense and to get them out from under the van so that we could leave. Honest. 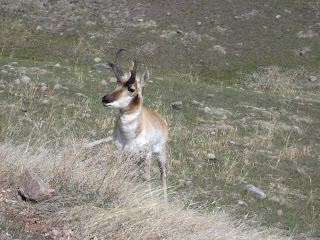 The pronghorn was not quite sure what to do with us once we had stopped and he approached us. He never did run away. We made as little noise as possible and kept the van doors closed. He appeared to be mostly puzzled, with tiny amounts of flight vs. flight thoughts bouncing around in his head. When we finally drove off slowly, he started grazing in the same place you see here. 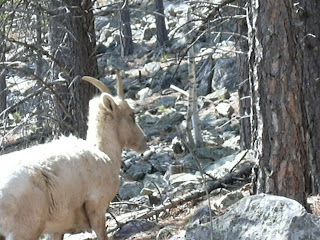 No zoom. This was one of three mountain goats that stopped traffic by sauntering down the middle of the road. They took all the time they needed to move up into the trees, with a distinctly supermodel attitude in their stroll. If they had been any closer to the van, they would have left hoofprints on it. It's as if we don't really exist in their world. Maybe we don't. 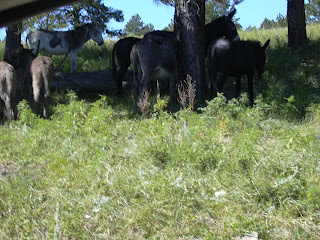 Custer State Park is home to a large herd of burros that are at best semi-wild. They also wander down the roads and stop traffic. Being burros, they are shameless about begging for treats and attention. 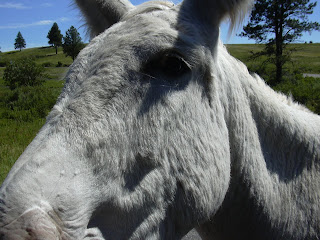 Let your attention stray for just a moment, and look what comes in the window.

Wildlife depends on your definition, obviously. These burros are feral, not wild, descended from domestic animals used years ago in the area. They're still used to human attention.

A good wildlife day lifts my spirits in ways that nothing else can. That point of contact with other species, that reminder that there is another time that runs deep, puts everything in perspective.

Tomorrow: flora. Or, why I need a better camera.

I love reading your posts. I've lived here all my life. But seeing this place through your eyes is makes it all brand new.