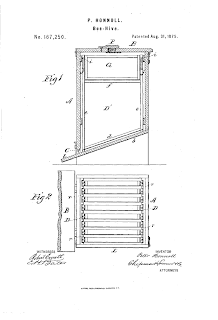 I have a good friend from college, Bill Page, who is an ace genealogist. He can find anyone in the world, I think. My grasp of genealogy stops at the difference between first cousins once removed and second cousins, which fried my synapses when I was 12. So it was only natural that I notified Bill immediately of my discovery of the Honnoll family and my connections to it (see the quilt post for details). Did he commend me on my detective work? Hardly. Being Bill, he contacted me no more than 15 minutes later to say "Is this your ancestor who filed this beehive patent?"

Of course it was. Bill wins again. As if I ever had a chance. (He points out to anyone interested that patent archives can be an astonishing source of unexpected genealogical information.) 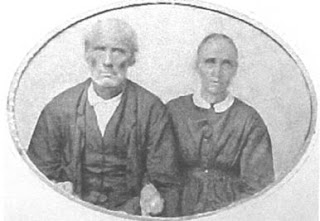 Peter A. Honnoll (1812-~1893) was born in York County, South Carolina, and died in Itawamba County, Mississippi. He married Mary E. Savage in Bolivar, Hardeman County, Tennessee, in 1836. The Honnolls seem to have kept wandering south and west after the original arrival, William Honnoll, arrived from Germany and landed in Harford County, Maryland (through which I commuted to work every day for seven years). Their daughter, Nancy Ellinor Honnoll Walker, wound up in Altus, Oklahoma, and her daughter wound up in West Texas.


But this post is about Peter and his beehives. The drawing above is part of the letters patent filed in 1875, titled simply "Improvement in Bee-hives." Apparently this was a major part of the family enterprise in Mississippi. Peter awarded two-thirds of his rights to his sons, James and Moses. Moses went on to receive yet another beehive patent in 1899, titled even more simply "Beehive."

Apparently beehives figured in Peter's will; a family genealogy correspondent states that he left his beehives to his second wife, Malinda.

Beehives would have been the difference between success and failure to the poor farmers of the time and place, but nothing about them has come down in any way through the years to my generation. This is as unexpected and alien as if Peter had been a pirate. Beekeeping was hard and constant work, both for the crops and for the honey harvest. There is no record as to when Peter started, whether he was the first one in his family to take up apiculture, or where he was in his travels when he set up beekeeping. Obviously he was good enough at it to take out a patent at age 63 and to inspire at least one of his sons to go even further, but other than the letters patent there is not a clue about this activity.

In 1875, Peter had survived the Civil War (in which he lost a son) and had left Tennessee for Mississippi. At least one of his children, Nancy, had packed up her family and left for Arkansas and Oklahoma; they never saw each other again. Farming in the Reconstruction South was a difficult life on a poor clay soil. And yet, he must have had that creative spark, looking for new ways to house the bees and harvest their hives without harming them.

I am fascinated. And I still don't know anything about beekeeping or why this beehive was so new. But I learned more about my ancestor from a patent file than any of us had ever known before. Thanks, Bill.